If you know even the tiniest bit about me, you know I am a weather junkie. I have been known to watch the weather channel like an award wining movie. And when the tornado sirens sound and everyone else seeks shelter in the basement or bathtub, I make a cup of coffee and go sit on the deck...
My husband blames the fact that I was born in Oklahoma...

I currently have TWO weather apps on my phone – the Weather Channel and NOAA weather which lets you track radar, rain, snow and any other weather maladies which might await. This handy dandy little app will also set off an alarm if you are under attack by rotating fronts and sheer force winds.

If only we had NOAA when on vacation.

It is always important to be aware of the weather when you are out on the water.
Especially when you are on the water in a non-motorized sailboat.
Or kayak.
Or a canoe with your husband's best friend. (There are no 'action' pics as I was afraid the camera would drown.)

Are you sensing a theme here?
I have been rained on nearly every trip I have taken.
And by 'rained on' I mean so soaking wet that the only dry area is under the life vest which is keeping me alive by keeping me warm.
Barely.
It rained the first twenty-four hours we were at Key Largo. But, that didn't stop us from kayaking the mangroves. The folks at Key Lime assured us there was no severe weather pending, only the constant rain.
They assured us once we were in the mangroves we wouldn't even notice the rain.
Probably because our travel-buddies' kayak was filling with water and we were trying to convince ourselves the slap we heard wasn't an alligator.
But, have you ever been in a mangrove forest in a rainstorm?
It is the most incredible experience.
Silence except for the gentle drop of rain and the chorus of wildlife answering.
Unbelievable.

We tried to study the weather before our first trip to the Caribbean. Everyday of the week we were to be there had those drippy clouds and lightening bolts on the app page.

We were tropical newbies.
It did rain nearly everyday we were there.
For about 10 or 15 minutes, at which point the rain would stop and a neon rainbow would appear.
Except for that one morning...
I woke to rain gently plinking our shutters.
I had my coffee on my lounge chair shoved under the protection of the eaves. The lizards also took shelter there. I think they were hoping for a piece of my Jamaican Meat Pie breakfast.
We have been caught on our various sailboats in various volumes of rain. Usually because the weather app and the actual clouds said 'maybe in might rain' and then decided once we were a little too far to make it back to shore that 'yes. It is going to rain'.
If there are lightening bolts on the app we don't go out.
You know that mast? It suddenly becomes the highest point when out in the middle of the lake. And those lightening bolts love highest points.

And because of that, it is always important to have a healthy respect for the potential for weather.
Pay attention to the clouds, the humidity, the weather apps.
Always keep lifevests well within reach and if there is any question, PUT THEM ON. They may be a little uncomfortable, but running a man overboard in the middle of a pop-up storm isn't the best either.

As they say: Keep a Weather Eye.

(FYI – one of the first times the term Keep a Weather Eye was used in literature was in Robert Louis Stevenson's book Treasure Island. Stay tuned tomorrow for more on that topic...) 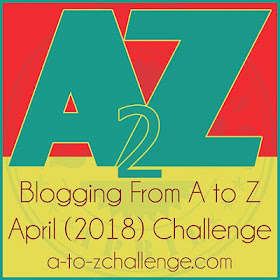 This is part of the A to Z challenge. For more entries click here: a-to-zchallenge.com