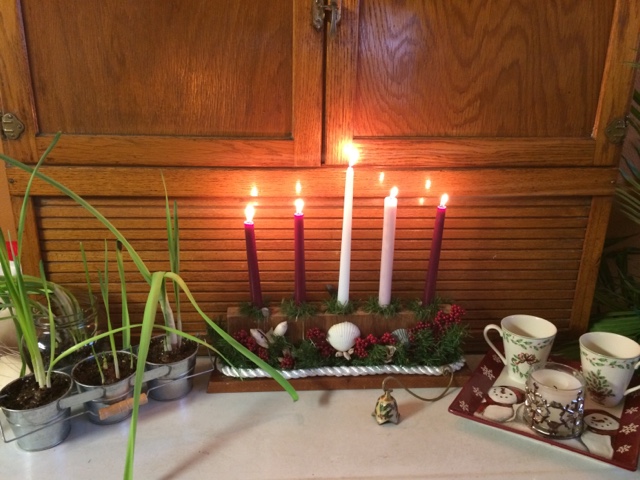 It's finally here...that long anticipated, over commercialized, tear-jerk advertising/movie inspiring, sappy song performing, emotionally charged, food laden, family and friend gathering time of year.
And despite all the craziness - the cooking and shopping and wrapping and worrying and traveling and stressing with a side of guilt... the day arrives.
It arrived quietly and, if you allow it, the day arrives with a sense of wonder and freshness and hope.

As a child, Christmas was nothing but catalogue lists, school and church programs and one long sleepless night.
As a young adult the excitement shifted to gifts given and received, the thrill of hosting for the first time.
When our own children arrived Christmas took in an entirely new glow, enhanced by their discovery of lights left burning all night, surprises beyond their wildest dreams; shaped by stories told and read through the generations.
Times are different now. The celebration is full of adults. The excitement is slow building, blocked by work and worries for the health of family and friends, tempered by the weight of all that is wrong with our world.
Yet here it is. Christmas Day.
I have been up since before those first rays of sun, tempered today by overcast skies and ridiculous 50 degree weather. (I have a strict - 28 degrees with gentle snow from December 3 through January 2 at which point the temps may once again hover around 70. So far, no one else has subscribed to this philosophy. At least no one who has control over the weather...)
We had our traditional breakfast of sugar bacon, cream cheese eggs and fruit. 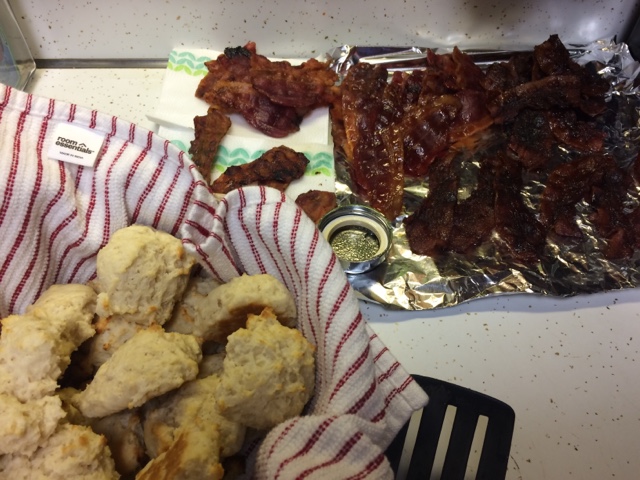 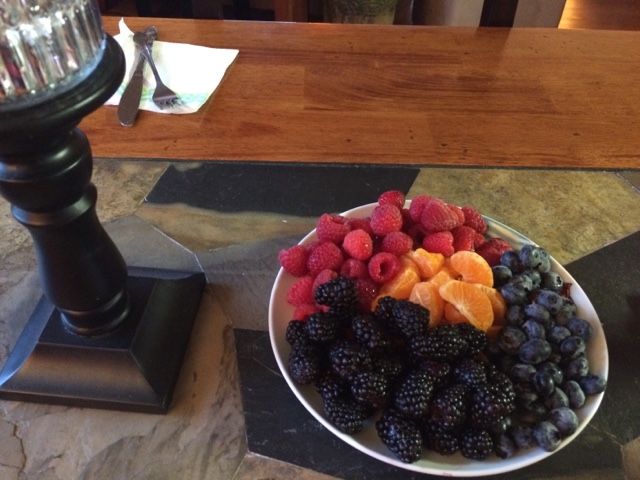 Because, healthy!
Gifts have been opened, cat puke cleaned up and appetizers ready for the next round of family and I find myself with a few minutes to send out this holiday greeting.
Thank you all for supporting this little blog. Updates have been a little sketchy of late but fear not - the coming new year has several ideas already on the calendar. In fact, later this week I will be posting my first actual sponsored post!!
I hope this finds each of you warm and content, surrounded by family and friends and non-vomitus pets. Whether you celebrate Christmas or Hanukah or just enjoy a nice afternoon, I want to share with you  a favorite quote from a favorite holiday movie - Scrooged:

I get it now! Then if you GIVE, then it can happen, then the miracle can happen to you! It's not just the poor and the hungry, it's everybody's who's GOT to have this miracle! And it can happen tonight for all of you. If you believe in this spirit thing, the miracle will happen and then you'll want it to happen again tomorrow. You won't be one of these bastards who says 'Christmas is once a year and it's a fraud', it's NOT! It can happen every day, you've just got to want that feeling. And if you like it and you want it, you'll get greedy for it! You'll want it every day of your life and it can happen to you. I believe in it now! I believe it's going to happen to me now! I'm ready for it! And it's great! It's a good feeling, it's really better than I've felt in a long time. I, I, I'm ready. Have a Merry Christmas, everybody.

Merry Christmas from my coast to yours!

Posted by LauraEhlers at 2:04 PM 3 comments:

Email ThisBlogThis!Share to TwitterShare to FacebookShare to Pinterest
Labels: Christmas

Bloodline! Giant Lobster! And SO MUCH MORE!

Hope everyone has survived the Turkey Coma!
We had a lovely Thanksgiving here on the Coast of Illinois.Thanks to all the merriment, I have once again fallen behind with my blogging duties.

So now, it's time to return to the road trip that was our visit to the Florida Keys!

When I told people we were heading to the Keys, the assumption was Key West. Yes. Our plan was to visit that iconic town, but the Florida Keys are so much more than the Southernmost Party town.

Rob and I were on the Bogart/Hemingway tour. Key Largo is a treasure trove of stops along that route. Just drive down US 1:

We stopped at the Caribbean Club one evening for dinner and were greeted by a rockin' live band and a whole lot of people drinking bottled beer. Not a surprise, but still not sure they actually serve food there. There are a few tables, a large bar and plenty of room for dancing or fighting. Out back are some great picnic tables with a beautiful view of Buttonwood Sound. We posed with Bogie, wandered around a bit then switched dinner plans to the Fish House where I had a glorious plate of Stone Crab Claws. Possibly the best crab I have ever eaten. Sorry, no pics. I was too hungry and delirious to take one.
http://caribbeanclubkl.com/
http://www.fishhouse.com/
A little farther down Overseas Highway sits a Holiday Inn and this marvel: 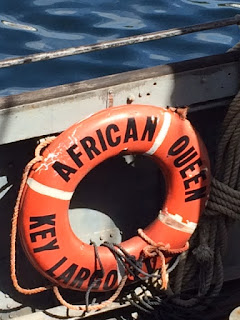 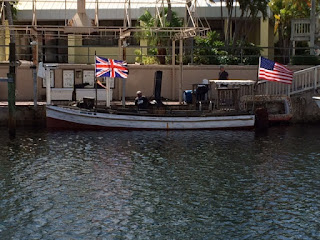 Yup. This is the REAL boat from the movie African Queen. We weren't sure our travel buddies were interested in visiting the boat so we stopped by one afternoon. When we returned to Key Lime Sailing Club and checked in the movie African Queen was showing on the television. The four of us flopped on the couch and watched Katherine Hepburn and Bogie fight off leeches and Nazis, I pulled out my Kate impersonation (one of three I can do...sort of...) and the next morning we returned to check out the boat again.


We were lucky enough on our first visit to catch the current Captain of the Queen. He gave us some history of the boat and filled us in on the actual technical workings. The boat was not just a movie set - it was an actual boat in Africa. She still has her steam engine, which is fired up on excursions, although the engine at present doesn't completely power her. There are always certain sites that touch a person more than others. I had no idea how much seeing this boat meant to my husband, as it turns out, it was one of his Mom's favorite movies. We learned that the Captain's Mom was most proud of him when she found out he was captain of this boat!
http://www.africanqueenflkeys.com/

Angie, one of our travel buddies, had done a little research of her own and turns out that the Netflix series Bloodline has used numerous spots throughout the Keys in the filming of the show. (If you haven't seen the show - it is a MUST.) Our trip actually started as we left Alabama Jack's with a search for Danny's bus stop. The bus stop eluded us for our entire trip, although it did become a running joke with Rob threatening to stop and photograph EVERY bus stop we passed.
One of the things we noticed most about all the sites along the Keys - there was very little hoopla about the various businesses being used in the show.
The Caribbean Club has been used in a few of the bar scenes.
Our favorite breakfast spot - Mrs. Mac's - is in several scenes.
We stopped at Robbie's Marina in Islamorada - used as Kevin's boatyard - only to find a tiny sign stating such. Of course, Robbie's offers some cool views of the sound, a chance to feed giant tarpons and a fun flea market.


We finally hit the Bloodline Motherlode with The Moorings.
This exclusive, luxury resort is the inspiration for the Rayburn House. It took a little adventuring to find the location, even with GPS. The Moorings likes its privacy, to the tune of a private drive on approach. But this was vacation, so we parked on the street and walked down the drive, trying our best to look like we belonged.

We were rewarded with a stunning view of the beach - I swear, the sun shone brighter, the sand and water glimmered more shimmery and everything had a pinkish glow. There may have even been a heavenly choir as we broke through the trees and the security guard's grasp to see this:

Actually, the security folks could not have been nicer. Visitors are allowed to walk a tiny slice of the beach, but no pictures of the main house or other lodgings are allowed. It is now a dream to actually stay for a night in one of these beautiful spots.
http://themooringsvillage.com/

Islamorada is only about a twenty minute drive from Key Largo. A very scenic twenty minutes - beautiful views of both the Gulf side and the Atlantic side of the islands and this:
The world's largest lobster...artist rendering...This magnificent creature - Betsy- signals a fantastic flea market The Rain Barrel Sculpture Gallery. We spent an easy afternoon shopping at the various artists shops and I had my first cafe con leche from a very politically minded-all inclusive coffee stand.
Who knew political consciousness was so sweet!!
http://www.rainbarrelsculpture.com/

On our way back to Key Largo we made a stop at the Hurricane Memorial. A sobering stop, but if you want to experience a location, sometimes you must see the bad as well as the good.
A huge portion of Keys history revolves around the 1930's railroad built to connect the mainland with all of the Keys. In 1935, one of the worst hurricane's in Keys history hit killing hundreds of railway workers - many WW1 veterans. The memorial was built in 1937, commemorating the devastation. It is an eloquent, thoughtful tribute to those who perished. Many of whom are interred in the crypt covered with beautiful tiles in the front of the memorial. 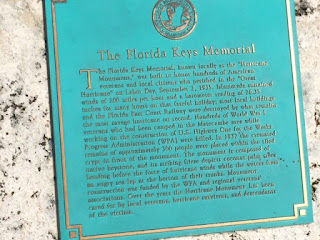 If you visit Islamorda, keep your eyes peeled for the historic marker and take the time to visit and reflect on some of the events which resulted in our ability to enjoy this wonderful part of the world.
http://www.keyshistory.org/hurrmemorial.html

I don't want to diminish the seriousness of that last site, but I also hate to end on such a somber note. So I will leave you with these last pictures of some of the more silly sites along US 1.


And finally, this guy. Yes, that's a dog. Sitting at the bar. His name is Barnacle and he is a regular. We saw him sitting at the bar at Snooks in Key Largo. After dining on some amazing gourmet food, I can completely understand why.

Come back next week as we head over the 7 Mile Bridge to one of my biggest adventures yet... 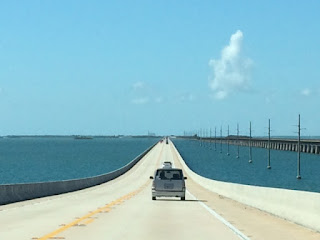