Where the Horizen Ends...

I have been getting a lot of grief lately.
We were lucky enough that life allowed us a return trip to Key Largo early in May and it seems my travel companions have been WAITING for some posts about the trip.
As well as more posts from our previous trip to the Keys last fall...

The fact of the matter is this.
I have traveled quite a bit these last few years; each trip even better than the last. I want these posts to reflect just how amazing these travels have been. I review my notes. I study the photos. But I am still at a loss for words.
I just can't seem to begin.

Our first trip to the Keys was a Griswolding Adventure of sites to see with some sailing.
This trip was about chilling, sailing and trying to figure out if the magic we found on our first trip down was real or just that 'honeymoon' effect.
Like we should have had a doubt.

No sooner did we land in Miami than my phone exploded with texts: Are you here? We're at Alabama Jacks! How much longer? Do you know what you want?
Rob and I were met with hugs, a fresh from the kitchen seafood platter, a Landshark Beer for me and a Rum Punch for him.
It seems that Alabama Jacks has become the place from which we launch...

We drive down Cardsound Road to US1, past the Caribbean Club and the African Queen to our home for the week, Key Lime Sailing Club.
The plan is to hang out, sail, eat, shop, sail...

That is just what we do, the week tinted by colorful Texan neighbors, frat house sing-a-longs, the biggest bag of whip cream I have ever seen, grocery store lunches, the most depressing final set a band could ever choose, a sunken golf cart, an accidental stop at what can assumed to be the 'home' of a Miami drug lord and this: 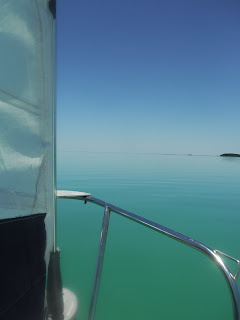 Our final day of sailing was perfect. The wind finally forgave me for some past transgression and allowed us to take turns riding on the bow under the shade of the jib. The perfect place on a sailboat. As I took my turn on manatee watch, studying the ocean for underwater floating rock shapes, I looked up to see that moment when the water of Buttonwood Sound changes from turquoise to Florida blue and rolls into Florida Bay in shades of sky.
The horizon was gone.
The boat became silent as we, each one, considered the possibility of sailing off the edge of the world...

Holy Goodbye Batman, now what do we do...

As most who read this know, I am not generally very topical.
But the news of Adam West's death is not a story I can miss.

I was only five when the television show Batman debuted. I have very distinct memories of my mom calling me in to watch. I don't recall what night of the week it was on. I feel as though it were in the summer, maybe early autumn.
Five year olds in 1966 didn't really pay much attention to the season, except for how it interfered with outside time.
Some may dispute my memory, but I promise you – more than once, when Mom called me in, I would jump off the play set, where I was desperately trying to swing ALL THE WAY OVER THE TOP, and forget to remove my pinkie finger from the chain which held the swing thus ripping my baby finger to shreds.
It hurt like crazy, this I also vividly remember, and as my poor mom tried to bandage my bloody pinkie, my only concern was getting to the living room so I wouldn't miss a minute of Batman.

I don't know what about Batman appealed to me, a five year old girl obsessed with Barbie.
My husband, also an original Batman fan and at that time a seven year old, the appeal was the adventure and the fight against EEE-ville. But being a boy, his entire life has been about adventure.
There was the silliness.
Those brightly colored characters.
The textually enhanced fist fights...
BAM!
KA-POW!
The ridiculous saying uttered by Robin:
Holy Davy Jones
(BatBoat Episode???)
Holy Wernher von Braun
(my husband assured me that last one most likely had rockets in it.
Holy Unrefillable Prescriptions
(I fear this may have planted the seed for my ER days....)

Yet, as I consider this show and its appeal, I think it really was the adventure that kept me coming back. As a girl in the late 1960's, there was very little adventure focused on girls. Sure, Ginger and MaryAnn were pretty adventuresome and that Lucy? Come on!
Boys always seemed to have the most fun. There was secrecy, plots, sneaking around and spying.

So, while the other girls were swooning over Robin, I was planning his...disappearance thus allowing me to fill in as his replacement.
Never did I dress up as Batman, or Robin. I did have a 45 with the Batman song on one side and Here Comes the Batmobile on the other. I think there may have been a Batmobile Matchbox car.
My husband had a lunchbox.
Yet Batman infiltrated my very being.
When a situation is difficult its hard not to say 'Holy... Batman!' If mention of the real Batmobile is made there is immediate discussion over how COOL it would be to drive it. And when the odds are insurmountable the phrase 'some days you just can't get rid of a bomb' flows through my head, if not out of my mouth where in my mind it is accompanied by a giant cartoon BAM!

Adam West will always be My Batman.
His Batman didn't have the gravely voice of Micheal Keaton, or the sexy good looks of George Clooney or even the chiseled, slightly psycho physique of Christian Bale. What he did have was humor and sweetness and a desire to only do good. (As mentioned early, remember in the Batman movie when Batman must dispose of a bomb but everywhere he turns there are babies. Or puppies. Or nuns....)
That original television Batman wasn't haunted by demons. Or if he was he kept it too himself. Never did he question the Gotham City Criminal Justice System or ask why the Penguin kept getting out of jail. He relied on his tact belt of tools and his sidekick Robin – not a slew of fantastical super powers.
Even when he apprehended those pesky villains, he was polite and would always ponder what sent them down a path of crime.

We couldn't binge watch, or DVR the show.
Every week, we had to be there, at that moment.
We then relived the show on the playground, in the backyard, improving and adding to the adventure until the next episode.
Maybe that was the real appeal after all...
Posted by LauraEhlers at 9:25 AM 2 comments: