As a self-proclaimed beach bum and feral Parrothead, it seems an odd choice that I would drive 10 hours in the opposite direction of the ocean for a long weekend get-away. Just 2 hours more and I could have been on the white sand beach of Destin. An additional 10 hours and 43 minutes gets me all the way down A1A to the motherland of Key West.


It pretty much falls down to number of days available- 3- and number of hours my well padded butt can handle an albeit, comfy, car seat- also 3. When you divide the number of driving hours by this pivotal number of butt hours, figuring a snack stop variable of 4...well...a Google maps ten hour drive is the limit.


Which is why I found myself desperately seeking A1A at a decidedly northern latitude.


The catalyst for this trip was a Scott Kirby concert. I was introduced to Mr. Kirby's music via satellite radio. His warm, pleasant vocals in songs about boats (Little Blue Boat) and beaches (A Night on the Beach) and general escaping (Sol Searching) as well as his hauntingly truthful stories of relationships (If She Tells You She's Batshit Crazy You Better Believe Her) bring to mind the warm ocean breezes of that mythical land known as Margaritaville.


His concert in London Ontario fell on this particular weekend and as we had never been to Canada it seemed like a good idea.


So I found myself driving north on highways numbered up to 93x higher than A1A towards a city named for a much larger city on a continent thousands of miles away.


London, Ontario is beautiful and was modeled after London England. As demonstrated by our hotel:
And this statue of a guy who looks like the hunter from Jumanji:


I would have also taken a photo of a cool tank in Victoria Park but there was a precocious seven year old on top of it who informed us that it was in fact his tank as, and I quote, 'I farted on it.' I am not sure what country's tradition this is but wouldn't it be wonderful if all  nation's disputes could be solved this way?


Our concert venue was the London MusicClub, essentially a space in the basement of a lovely Victorian mansion. I have to admit, after being surrounded by all this English-ness, I was sort of hoping for some East Enders in leather jackets and tight, straight-legged dungarees. Sort of a Sid Vicious without the heroin.


Instead, we were greeted by the LondonParrothead Club whose members had considerably fewer piercings than Sid Vicious yet were equally delighted that we had actually driven all the way from St. Louis, Missouri. (I didn't try to explain that we were actually from the Illinois coast. And I am only assuming Sid would by delighted by our trip, although I hear he was a huge fan of road trips.) 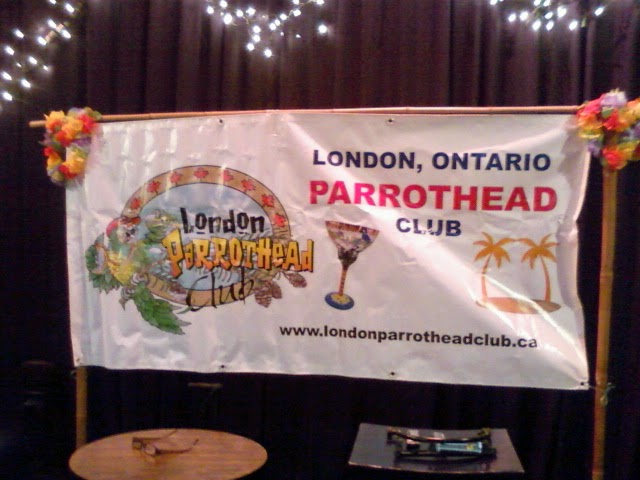 It was a fabulous afternoon of Hawaiian Shirts, tiki heads and beach music. It was even the hottest, most humid day of the summer. 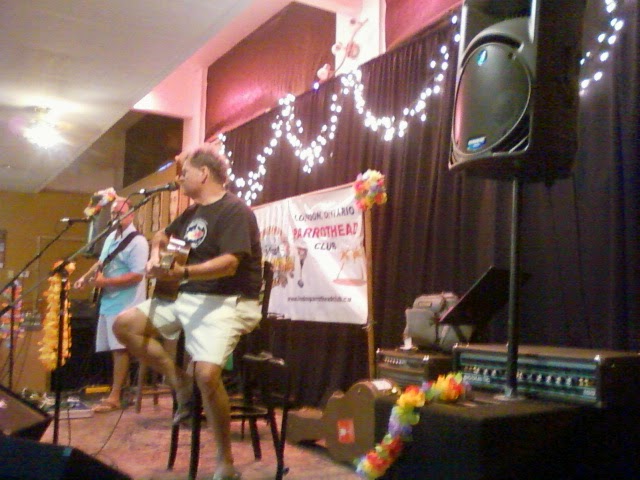 Except for the lack of palm trees we could have been in Key West. Which is not what I expected while visiting a city in a foreign country, named for a bigger city in a different foreign country. In fact, the afternoon felt nearly identical to the first time I saw Scott Kirby play, which was in a tiki-bar styled venue in the back room of a pub type restaurant on the Coast of Illinois.


And then one of the concert-goers did something which to me is existentially Canadian. He asked Mr. Kirby to sign a CD with 'A1-eh?'


And as we walked back to the hotel we were caught in a perfect London rain.

Come back on Monday for the final installment of  Coast of Illinois Goes International ~Once Again I Find Myself at a Border
And if you missed part one...Click HERE
Posted by LauraEhlers at 10:44 PM