My sanity has always been a tiny bit on the questionable side...
It took a turn for the lunatic in 2008.
I didn't realize it at the time.
Of course, that's what they all say.

What happened in 2008 you ask?
Well, my husband decided it would be fun to build a small sailboat from a kit.
Never mind that we neither one know how to sail. Or that we live in the middle of the country where there is very little sailing, compared to, oh say Maine or the Caribbean. 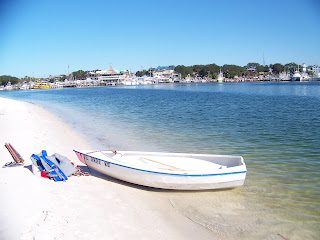 Nothing But a Breeze was built in 2008 and took it first trip to the Gulf of Mexico in the back of a rental truck in 2011 where we were the entertainment for everyone in Destin harbor.
And a sea turtle.

It was a short keel-haul to phase two: 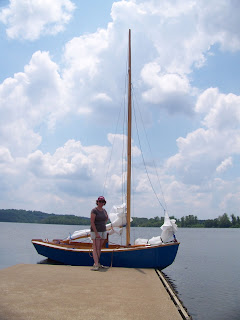 A 15 foot sloop built from plans. Blue Skies took a little bit longer to build, beginning in 2009 and launching in June of 2013. Later that year she got her first taste of salt water, again in the Gulf at Destin where we entertained everyone in Choctawatchee Bay.
And some dolphins.
And a guy in a HUGE yacht who thought it was funny to cruise really really close to us, causing us to surf down his wake... 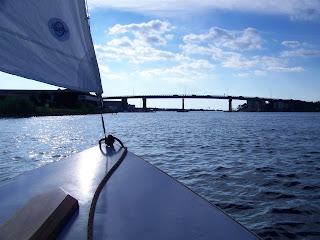 Fast forward to 2016.
We have been sailing for 8 years now. We both have US Sailing 101 certifications. Rob has ASA Sailing 103-104. We have rented and sailed 24ft to 39ft mono-hull boats on both fresh and salt water.

And in December of 2016 we kicked off the holiday season by purchasing this:
Cool Change.
A C&C24.
A 24 foot mono-hull sailboat with a v-berth built in 1976.
A fixer-upper.
We pondered the purchase of this boat for nearly a year -http://www.coastofillinois.com/2016/06/middle-age-couple-checks-out-fixer-upper.html, first taking a glancing look at it in the fall of 2015 then again in the Spring of 2016. I was against the purchase while Rob was for it. Then I would be pro-boat and he would be against.
We both knew that owning a boat, docked 3 hours away, would mean many weekends away from home working on projects. But it could also mean owning a boat 3 hours away from the hub-bub that is staying home on a weekend.
It was on the drive back up US 1 from Key West to Miami last November, coming home from a vacation where we sailed several days with friends on our own 'personal' sailboat that we both, nearly simultaneously said – 'remember that old sailboat...'

And after much negotiating and a fortuitous price drop we became the proud owners of a floating project.
I am still not sure if the seller was more excited that he had unloaded the boat or amused that we actually bought it.
We spent the first few hours of ownership taking turns climbing in and out of the hold, unloading everything that would fit in the back of our car for the trip home. The plan being to spend the cold winter months beginning the rehab project.
Things have moved along quite nicely.
We brought back the table, companionway doors and tiller.


My only contribution so far has been to help unfold and refold the sails and convince Rob to replace ALL the slugs on the two main sails. The boat, for reasons unknown to us, came with FIVE sails - two main, one jib and two genoas. Genoas being extra huge jibs, for really catching a lot of wind, especially should you wish to race...
Here is what FIVE sails in a family room look like:


My other contribution has been to over-dye the cushion fabric. Originally we thought about completely re-doing the upholstery but on closer inspection the fabric, while faded, was in pretty good shape. The cushions are firm and not at all musty. This is a huge savings this year. Upholstery fabric is a little pricey and cushion foam is crazy expensive. Eventually I have plans for a Pintrest worthy fabric re-do. But for now we will be happy with Navy blue.


As we get closer to Spring, we are both getting more excited to get down and actually spend some time inside and out. Rob has a first hand, splinter to splinter knowledge of the two boats he has built. This one remains something of a mystery. The owners manual, while extensive, is no match for hands on living. I have only been inside twice, the second time while the boat was on stilts - not very conducive to planning. My dream is to have a beautiful, functional albiet tiny living space where we can retreat on weekends.

Next big project is restringing the sheets to the mainsail.
And repainting the hull prior to putting her in the lake.

Stay tuned for more This Old Boat!!
Posted by LauraEhlers at 10:50 AM