Welcome to the Coast 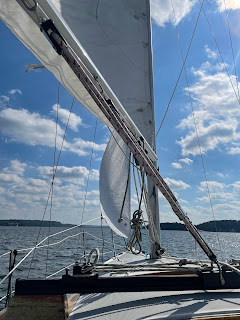 It’s been a while, hasn’t it…something like two years and a month….

Things have changed, haven’t they? We have all been through some stuff…

I have tried, on more than one occasion to get a post up, but they all just seemed so…depressing.

But, time passes and hopefully we have learned a few things to better prepare us...

Prepare us for things like, oh, I don’t know…making a new sail…???

2019 saw our old sailboat die a sudden death by broken mast, aided by 40 years of poor upkeep compounded by rotting would and some really good wind. We were rail in the water when we heard the CRACK. Initially assuming it was all our stuff flying to the leeward side.  Instead, that horrible sound turned out to be one of the mast stays, which had pulled free of the interior anchor thus leaving the mast partially unsupported. I dropped the mainsail as Rob started the engine and we cautiously motored back to dock at 5mph. All the time discussing how we were going to fix the problem. Once docked, it become clear that the best way to fix the problem, short of sinking the boat in a hidden cove, was to somehow donate the boat.


As luck would have it, the marina Cool Change lived at was run by a sailboat lover and they worked out a deal to just take the boat, and it’s brand new outboard, off our hands.

We decided then that our little 15ft wooden boat would do from here on out.

We decided that we would not buy another boat.

So, two years later, we bought a BIGGER boat…. 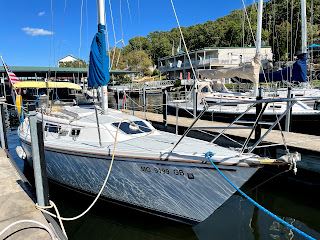 St Frank – formerly/currently/actually – named St Frances by her previous owner, will be eventually undergoing a name change. (Can a boat be gender fluid?) Not that we have anything against St. Frances – I have known two very lovely women named Fran. But St Frances is just not a name that fits us. Once we land on a name fitting to all three of us – Rob, me and the boat – there will be a renaming ceremony. I can’t risk angering Neptune any more than I already have.

St Frank has it all, her previous owner outfitting the cozy sloop with a microwave, a portable electric refrigerator, a sound system and an AIR CONDITIONER!! We have seat cushions, kitchenware, movable cupholders and no jib. (The jib is the smaller, front sail on a sloop. It helps balance the larger main sail and just makes the whole boat so pretty.)

What the boat does have is a storm sail, which is a much smaller front sail for inclement weather and a Genoa.

A Genoa is an ENOURMOUS front sail which grabs every ounce of wind there is allowing for some fast racing, if you are so inclined, and a lot of heeling. (Where the side of the boat leans into the water, which is fun, but the exact opposite of relaxing which is always my goal when on a boat.)

Which brings me to the theme of the next few posts (yes, there will be more!)

Because sails are expensive and we have already spent our Not Buying Another Boat budget on the above said boat, AND because I have made two other sails, it was decided that we would order one more sail kit from Sailrite.

The two previous sails were also Sailrite kits – precut sail pieces, hardware and some really helpful directions and diagrams. These sails were for our wooden boat. Because if Rob could make the entire boat of wood, just think how cool it would be if I made the sails…

Anyway, it was definitely a learning curve. But it has been 15 years since I made those sails and apparently 15 years is exactly how long it takes for me to forget what a semi-complicated and awkward process sail making is on a portable home sewing machine.

Sails these days are made of dacron – what can only be described as plastic paper fabric. It is stiff when new but over time softens to an almost leather feel. And it makes a cool popping sound as the needle pierces it.

The mast for this new/old boat is 30ish feet tall, which calls for a rather big sail. However, all I heard when discussing this project was ‘jib’ and ‘it’s a smaller sail than the main’.

I have no concept of size, or distance. All I knew was the last jib I made was not enormous.

I am pretty sure my judgement was impaired by a tasty rum drink.

The sail comes precut in sections. The process involves sewing sections together and then sewing these sections to the other sections until you have an entire sail. The idea is to keep the sections a manageable size. Which in theory makes sense, if you have a football field size work room with a table of the same dimensions.

I have two folding banquet tables, in a fully furnished basement family room that also currently houses a banana tree waiting for above 40 degree weather outside.

At this posting, the sail is about a third of the way finished.

Upcoming posts will discuss the finer points of securing, rolling and wrangling dacron, repetitive bobbin winding and needle threading and dealing with the panic of thinking you have sewn everything backwards……

Posted by LauraEhlers at 9:37 AM