Yes. You are on the correct blog.


Yes. Last week's post was all happy island and sailing.


And Yes. The first picture you see here is a snow packed forest of pine trees. 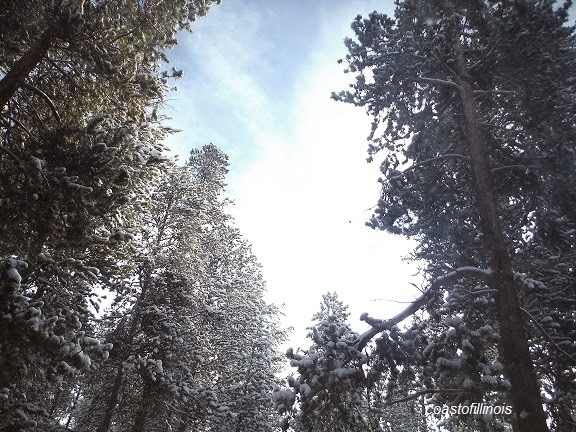 
I made the mistake, several months ago, of asking our kids what they wanted for Christmas. We have always been lucky when it comes to wish lists, now that our kids are a good twenty years past the Toys-R-Us catalog age. They have never really asked for a lot of stuff, either cheap or expensive. They are both out of college, working, and dedicating free time to fun. I expected a random list of household items, clothes, books. What I got was this:


"When can we all take a vacation together? That would be nice."


Well. I am always up for a trip. So, Bart and I threw out the next obvious question. "Where should we go?" Even though we both knew what they were going to say. 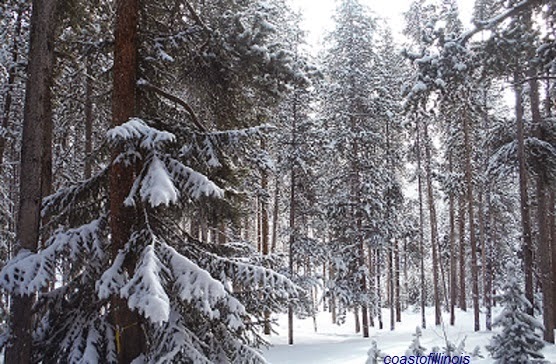 Which is how I now find myself at 9000 feet watching the sun glisten off about a foot of fresh glittery snow which sits on a base layer of about 4 1/2 feet of old cruddy snow. By cruddy I mean hard packed and icy, my skiing nemesis. I am wearing no less than three layers of clothes, not a swimsuit. But there is still a huge bottle of sunscreen sitting next to me (because nothing is funnier than a sunburn in the dead of winter) and Trop-Rock is playing on the ipod so...


We first took our kids skiing fourteen years ago. Bart is a well practiced skier, having had a friend whose brother worked the ski patrol in southern Colorado. I manage to not embarrass myself, after falling rather than gracefully exiting the lift and being married to a man who has the patience of a saint and the wisdom to know better than to try to teach your wife the basics of anything.


Our son took to the slopes as though he were born with skies on his feet. Our daughter caught on over time, having inherited her mother's fear of falling off the lift and her father's tenacity and athleticism.

We have since made a point of the family ski trip as often as we could, but time being what it is and life being time's accomplice, we have not managed the trip in several years. The fact that both kids wanted to spend a few days with us made it very easy to finagle the schedule and the bank account and here I am, not so much on a beach but nearly smack in the middle of the Continental Divide.


Winter Park, Colorado has been our ski destination of choice. The town is about a ninety minute drive up from Denver, depending on the weather, through some beautiful and breathtaking scenery. Years past we have driven the entire trip from Illinois but more recently have opted to fly. This was the first year we haven't rented a car, instead using the Home James service to deposit us at our condo.


The town and resort has a fabulous bus system in place, all free, which makes getting around pretty easy, unless you are attempting to make it to Safeway on your first night during the forty minutes when the buses switch from day schedule to night. Suffice it to say, there was a tiny bit of running with six bags of groceries and a case of soda divided amongst three of us. And we still managed to miss the bus.


I blame the lack of oxygen. And possibly my lack of running. Whatever. A bus eventually came around (apx 15 minutes and half a bag of popcorn later) and even though the route only required the driver to drop us at the bottom of our hill, he took pity and drove us to our door.

We are not only location loyal. We are also condo loyal, choosing BeaverVillage Condos as our home away from home. This year our two bedroom unit is equipped with a nice kitchen, comfy living room with electric fireplace and a pull out sofa bed. Our bedroom also has an electric fireplace which is lovely to look at as you pass out from oxygen deprivation and physical exhaustion each evening. There is a second bedroom and two bathrooms. Plenty of room for four adults.

Downtown is only about a 15 minute walk, downhill. This takes a little longer going back up. At night. After eating all the BBQ ribs at Smokin' Moes. Of course, there are buses running until 11pm so the apres dinner walk is not mandatory.

WinterPark Resort is a ten minute bus ride and offers on-site ski rental and storage, a variety of dining places and an equally nice variety of trails, depending on how insane you are. Winter Park is also the National Center for the Disabled and as such offers a wide range of activities for people needing adaptive services no matter the ability level. Let me tell you, nothing gives you that 'I can do it' push like seeing a laughing five year old with only one leg shoot past you on skis.

As I write this, Bart and the kids are out on the slopes, navigating trails with names like Jabberwocky and White Rabbit. I opted out of actually skiing this year mostly due to a huge lack of preparation on my part. I plan to meet up with the group later this afternoon for dinner at The Cheeky Monk where they will regale me with tales of moguls and hairpin turns and I will wonder just how it is I am related to these people.

We will spend a few more days in close proximity to one another. Conversation will run the gamut from everyday topics such as whose turn is it to shower first to less common discussions of geriatric cocktails such as daiquiris made with strawberry ensure and one-a-day vitamin Bloody Marys to just plain silly rodent training videos. We will force the kids to watch such 80's classics as Seems Like Old Times and Meatballs and they will insist we catch up on Nightvale.


And with any luck, they will want to do this again in a couple of years.
Okay - UPDATE - I had to add these last two photos. We had our final dinner at Casa Mexico - being as it was National Margarita Day.

On our walk home it was snowing the fine, silvery, glittery snow you get in the mountains and the Beaver Village Lodge was, well, I'll let you decide!

Please click on the links throughout this post. It is not a paid post but I can assure you these are great places, and that's not the lack of oxygen talking!
Posted by LauraEhlers at 8:47 AM