Today I present you with the Sailing portion of our Lost Shaker of Salt tour.
It should be noted that, while the ocean and I have a...gastronomically distressing...relationship, where as I love nearly every edible creature which comes from it's briny depths, the ocean loves to make me throw up.
There is NO throwing up in this installment.
Although the ocean gave it it's best shot.

You should also know a little bit about sailboats. The underside of a sailboat – which looks sort of like a fin – is the keel. The keel helps stabilize the boat and keeps the boat from sliding sideways in rough waves and heavy winds. There are several types of keels. Our little boat has an adjustable keel, which means we can pull it up or push it down as we need. Some boats have fixed keels, which means if you get into water that is too shallow you run the risk of ripping the keel right off the boat. This is not good. Our boat at Key Lime had a swing keel. This allows you to adjust how far down the keel is, either by using the crank or hitting the bottom causing the keel to make a terrible scratchy, sandy sound.
Not that this happened to us.
It's just something I heard.

Now we may continue with the good part of this story. But keep all this keel talk in the back of your head. It is very important.
Key Lime Sailing Club is situated on Buttonwood Sound which is on the west side of the Key Largo – the east side being the Atlantic Ocean. Several other islands, or Keys (Cay in Spanish), form a semi-circle surrounding the sound. This offers guests several options for nice, relaxing day sails.
Naturally, there was little relaxing when WE took to the ocean.

Tuesday dawned brightly with sunny skies dotted with billowing clouds. And a small craft warning as winds were 15-25mph. But the status board said, Have a Good Sail, just be careful.
Itching to take to the sea, we loaded up our bags with sunscreen and water and pretzels, setting our sites on Porjoe Key, a easily visible landmass about 3 nautical miles from shore.
(I do not know how a nautical mile corresponds to a highway mile except to say that there are no rest areas on a nautical mile. If you must 'rest' we were outfitted with a large bucket, plastic bags and a roll of paper towels. There was an unspoken understanding among the four of us that WHOEVER uses the bucket last must empty the bucket. No one used the bucket.)

Here is an interesting fact – the water surrounding the Keys is surprisingly shallow. Buttonwood Sound averages anywhere from 5 to 7 feet deep at its shallowest, with a couple of areas only 3-4 feet deep.
This explains why there were so many shipwrecks in days of yore.
It was requested numerous times that WE not become one of those wrecks.
Of course, the thought of a treasure hunter one hundred years from now salvaging our bounty of fizzy water cans and lip balm is still pretty hysterical.

Also, about halfway toward Porjoe Key, there is a metal post with a sign notifying people that you are entering the Everglades National Park. Except the sign itself is gone. Leaving only a metal post protruding a couple feet about the water, assuming that ocean water remains smooth and waveless at all times. We were emphatically instructed to WATCH FOR THE METAL POST. The best way to avoid it was to sail towards either end of Porjoe, not directly at it.
With all these instructions in mind, we happily set off, motoring through the mooring field, keel fully cranked. Once beyond the moored boats, we turned into the wind, shut down the motor and let loose the sails. Except that three of the hanks which hold the main sail into the channel on the mast had popped loose.
But our BVI instructor Toddy, had done a good job and Rob never gets into a boat without a pliers. Which miraculously worked to open the mast gate enough to re-thread the hanks.
We began to sing our sea shanties and hoist the sail again, only to have it reach halfway up the mast and stop. There was a reef point already set (this alters the size of the sail, making it more controllable in small craft advisory winds) but even taking this into account didn't allow for our new hitch.
It is here that I enjoyed my brief moment of saving the day.
As we all fumbled with various lines and rechecked for snags I pointed out that the 'boom vang' was still secured. I dramatically popped it loose and the main sail rose to its appropriate height on the mast.
(The Boom Vang is probably the most ridiculously named piece of equipment on a sailboat. However, it keeps the boom from bouncing around, thus decreasing the chance of knocking someone in the head while they are failing to pay attention to the boom while watching for an unmarked metal post in the middle of the ocean. Oh, it also helps maintain a nice sail shape allowing for better wind usage.) 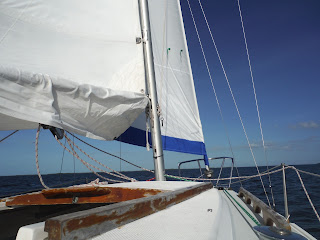 While Rob manned the tiller and the main sail, we three crew members were constantly on watch for manatees, dolphins and the deadly metal post.
That first day was actually quite lovely, even with the threat of high winds.
We were out about two hours and made it back in time for lunch at the Fish House and then a rousing drive through Islamorada in search of landmarks from BLOODLINE.
(More on all of these thing in later posts.)

Wednesday looked to be an even better day for sailing, according to the status board.
The Small Craft Warning was replaced by Small Craft Advisory, with winds in the 12-22mph range.
Great Day to Sail, proclaimed the dry eraser board.
Our adventurous plans were to sail to North Nest Key, where we would anchor and have a picnic lunch and snorkel before returning triumphantly home.
Of course, you have to find North Nest Key...
From a distance I simultaneously saw one extremely large key, then two separate, then one large again and finally something which resembled a plate of stone crab claws, but I was pretty hungry by then.
It was decided that we would figure it out, the closer we got to the island.
Great thought except that, due to that pesky keel thing and the shallow water depth, we were also instructed to crank the keel all the way up – so as not to RIP the bottom off the boat...or at least drag the keel in the sand making a terrible scraping sound.
So I have heard...

We were all feeling quite professional as our boat cut through the deep blue water, avoiding the mysterious metal pipe and the shallows near Porjoe Key. We ooo-ed and aaww-ed as we saw the water flow from deep blue to emerald to sea foam green. We laughed at inappropriate jokes regarding the grapes we ate as a snack. Our friend Angie took the tiller and did a spectacular job steering us towards the elusive end of North Nest Key. 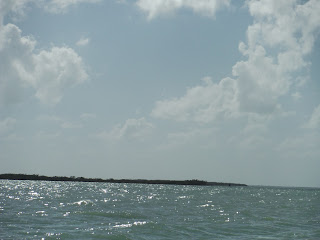 As we reached the point where we should either turn towards North Nest to anchor, the wind – being windy and all – took that Small Craft Advisory to heart and began to blow harder. Rob took over the tiller and as a group we decided to turn around and head home. Which at this point was the tallest radio tower on Key Largo.
Turning a sailboat is not the simple task one would think. You, know, with that wind and all. Because of the wind speed, we needed to turn into the wind and 'come about'. This requires gathering enough speed to keep the boat moving through the wind as the mainsail swings to the opposite side. At that point, and ONLY at that point do you pull the jib around.
I know this.
I do it often.

And this is where I lose my amazing BoomVang points.

By pulling the jib over too soon, the wind pushes the front of the boat back where it just came from and the boat loses all momentum requiring yet another run to gather speed and 'come about' again.
I will let you figure out what I did...

Anyway...after a successful second attempt we began our journey home. Angie, Mike and I acted as human ballast and moved forward and aft to help keep things in balance as the wind blew slightly harder, the waves rolled a little less gently, the water glittered a whole lot more spectacularly and those of us in the front of the boat were splashed consistently.
Rob swears he did not do it on purpose, that he was really just trying to not slide into the shallows around Nest Key. (This is when a keel is super helpful to keep the boat from sliding as the wind moves it along. Our keel was safely cranked to avoid the shallows. You know, after making that delightful, momentary, scraping noise I talked about earlier.)


It was an exhilarating trip home. A trip that was rewarded as we prepared to dock between the pilings – Mike at the bow stood ready to maneuver the bow as Rob swung the boat around and essentially parallel parked at the dock – when he shouted 'MANATEE!'
Angie and I threw our ballast to the opposite side of the boat just in time to see the graceful rounded shape of a manatee glide from under our boat and out to the sound, lifting it's snout from the water to give us a welcome home snort.

We ate our picnic under the Tiki Hut.
There was much discussion of our days at sea.
Mike and Angie earned their very own sailing logs.
And Rob and I felt even more certain that we could disprove the old saying – "it is easier to make friends of sailors than sailors of friends".

The following video is not mine. It is the 2012 video winner by WoodSong Duo for the Key Lime Sailing Club contest and features a song about the club. I heard this song and saw this video numerous times before our trip but the first time I heard it after coming home from our trip did I realize what a truly amazing place Key Lime is and what a truly wonderful time we had. It is absolutely a place we will be returning too.

Come back Wednesday for more of our adventures in the Florida Keys!!
Posted by LauraEhlers at 6:37 PM