So. Here we are.
Another wild adventure behind me and a blank page before me. So many things to tell about this trip. Guess I will start at the beginning...

I don't know exactly when Bogart, Bacall, Hemingway or Buffett entered into my personal fabric. I do know – for fact or fiction – they are people whom I admire.
I suppose Peter Brady's infamous "pork chops and applesauce...that's schwell...." started the longing to see what all the Casablanca fuss was about. Truth be told, I saw Play It Again Sam long before I saw Casablanca.
Didn't matter. Loved them both. Factor in Lauren Bacall's biography, read as a teenager; the movies To Have and Have Not and Key Largo; my hopeless romanticism...

Which sort of rolls into Hemingway.
I had a passing acquaintance with him in Sophomore lit class, Ernie in a turtleneck, glaring down at us from a mass produced poster, the back cover shot from The Old Man and The Sea. I didn't actually read Hemingway until Junior year American Lit. For Whom the Bell Tolls, The Sun Also Rises, all the Nick Adams stories...I fell hard.
Not for the author, but for the image and lifestyle.
I read The Sun Also Rises every summer until I discovered The Garden Of Eden. And then I read them both, imagining myself traveling through Spain, eating fresh caught trout and drinking wine from a short stubby glass in a cool, dark bar...

Over the years, my husband and I have read and discussed nearly everything Hemingway has written. Our favorites have shifted here and there as our knowledge of his actual life has increased. But in the end it is still about living. Truly living an adventurous life.
Soundtrack by Jimmy Buffett.

It was with much literary description, cinematic glamour and trop-rock soundtrack that we decided to do our own tour of the Florida Keys. We were armed with a list of 'must see' sites:
Sloppy Joe's Bar
Hemingway's Fishing Boat
US 1
Alabama Jack's
Captain Tony's
Hemingway's House
Mallory Square
Card Sound Road
Mile Marker 0
The list covered an entire page of notepaper.
Front and Back.

I was afraid that the trip would pale in comparison to the build up our years of imagining and months of planning.
Ha.

As we made the slightly illegal U-turn in our rented Honda, to catch the turn off for Card Sound Road – don't trust the I-phone GPS – my heart began to pound. And there it was: 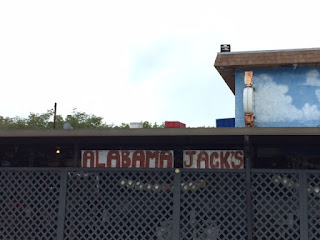 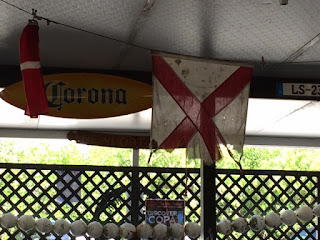 Described in professional travel guides as a honest to goodness dive bar, the outside did not disappoint. We walked in to a laughing, rum punch fueled welcome by the friend's who decided to meet us on this odyssey.
They had been warned.
This was not going to be a 5-star, butler in the hallway, dressing for dinner sort of vacation.

What none of us expected was such a delicious meal.
A couple more rum punches and a Landshark beer later we headed out, down Card Sound Road to Key Largo and the Key Lime Sailing Club. Our home for the next five days.

Of course it is never that simple. We had heard a rumor that the bus stop from Bloodline – the one Danny leaves and returns and doesn't show up from was just down the road from Alabama Jack's.
We never found it. Although we were tempted to take a photo of every other bus stop we passed, just in case.

Driving down US 1 through Key Largo was like flipping through our list. The Caribbean Club on the right. The African Queen on the left. We watched diligently for the mailbox with the white picket fence, just after Mrs. Mac's Kitchen near mile marker 99. (After checking in at MM 108 – everything is measured by mile marker.)
The driveway was interesting. As was our welcome – by several men raptly watching another guy sitting on the ground cleaning a cannon.
Yes. Just a guy, cleaning a cannon. A pretty brass one destined to be attached to a sailboat on the other side of the island. Sadly, I didn't get a picture. I was a little distracted.
By this:
And this:
CJ, the right hand man to owner Paul, gave us our tour, some helpful hints for groceries and dinner and the heads up that Sailboat Orientation would begin in the morning at 9am sharp.

Still a little overwhelmed by the flight, the history, the cannon...we unpacked, swung by Winn-Dixie for supplies and concluded Day One at the Fish House where I learned just how delicious those Stone Crabs really are.

For your viewing pleasure, a very unprofessional tour of our cabin:


Come back on Saturday for Day Two: Sailboat Orientation and Mangroves. In the Rain

If you decide to re-create any or all of this trip:
Alabama Jack's is located at 58000 Card Sound Road. It is an open air bar specializing in local seafood. While described as a 'dive bar', the place was clean and the food delish. No need to dress up. Trust me. The line of gas cans by the bathrooms pretty much sums it up.
Key Lime Sailing Club is this interesting little cluster of cottages. In its previous life it was a fish camp. The ten cabins have been converted to cozy, eclectic rentals, each with BBQ grill, patio table and access to your personally assigned sailboat.
Yes. Sailboat.
No worries if you don't sail. The Club is affiliated with the American Sailing Association which means you could actually learn while you vacation.
If sailing isn't your thing your rental also includes access to kayaks, paddle boards, snorkel equipment, a hobie-cat and a sunfish sailboat.
You can find the club at 101425 Overseas Highway #922 Key Largo, Florida 33037
Call for reservations: 305-451-3438

The Fish House (10241 Overseas Highway Key Largo, Florida) and The Fish House Encore – owned by the ex of the Fish House owner – sit side by side. No reservations needed, although they are pretty busy in season. Again, no need to dress up. As stated, they serve fresh caught, local fish as well as offering chicken and beef options. But really? Why?
Posted by LauraEhlers at 3:47 PM