Orientation and Mangroves. In the Rain

I love being on vacation.
I do not love getting up early on my first day of actual vacation, but Key Lime Sailing Club really wants their sailboats to remain in one piece so on our first day in Key Largo I crawled out of bed to attend SAILBOAT ORIENTATION.

A bit of info here: Key Lime Sailing Club provides, with cabin rental and appropriate credentials-for me this included US Sailing 101 for my husband US Sailing 101 and ASA Sailing 103-104 as well as previous sailing trips on our log-, a 22 ft Catalina, swing keel sailboat. Having your own sailboat available the entire time you are staying somewhere is HUGE. Renting a sailboat can cost upwards of $300 a day and then there is no guarantee that the weather will be cooperative in the sailing of said boat. Which was dully noted as it rained our entire first day in Key Largo.

At 9am sharp, six of us met under the semi-leaking Tiki Hut. (As noted above, it was raining. Sometimes sideways...) CJ, manager of Key Lime, proceeded to go over navigational maps, keel operation, easy sails, longer sails, mangroves, a mysterious steel post somewhere in the middle of the Intercoastal Waterway, curfews, boundaries and the status board which proclaimed the weather conditions and encouraging words for each day.
The others all followed along, nodding their heads wisely. Asking questions about buoys and depths and motors. I, too, nodded along but in my head, this is what I heard:

Of course, you need to substitute 'sailing' and 'sailboat' for 'parachute' and 'airplane'.

Thirty minutes later I had a moderate understanding of how to read the fuzzy map with multiple lines and numbers and triangles on it. We left the meeting with a solid plan to kayak the mangrove swamp as the status board proclaimed RAIN-NO SAIL today.
Because somehow kayaking in a swamp in the rain was OKAY.

Two of the volunteers from Key Lime and CJ loaded our double kayaks into a monster truck and escorted three couples to a good launch point. We are pretty sure they all had bets on who would back out first and who would actually come back alive and/or still happily married.
I should note here that I have never kayaked. I have canoed, the last time in the rain, so I feel this trip was really no big deal.
Getting into the kayaks proved the most challenging task. And while providing a whole lot of laughs, no one actually fell into the water. Which was a moot point as now it was once again raining sideways. Raining so hard, in fact, that our friends kayak filled nearly to the top with water... 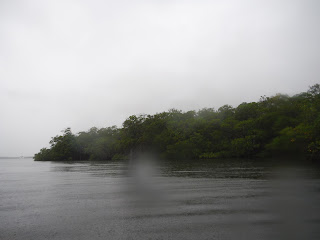 Anyway, single file we set off across Tarpon Basin, approximately a mile but in the rain at times endless, towards what we hoped was the mangrove swamp with the solid direction to 'cruise along the shoreline and keep a close eye for the opening. It looks just like a dead end until you get inside...' 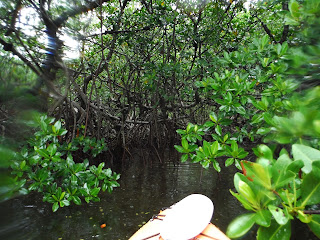 Turns out this was actually really true advice.
We attempted several dead ends before finally, to a chorus of heavenly soaking wet angels, found the entrance.
Mangroves are an interesting species of plant. Growing half in water and half in soil, their intricate root pattern stabilizes coastlines from erosion and provide a home to multiple species of bird, amphibians and fishes.
And gators. 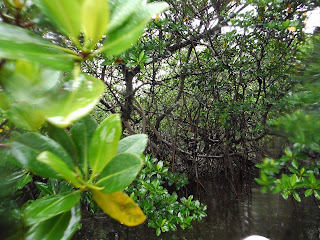 While we never saw any gators, we did hear a SLAP on the water which was way too big to be a frog and way more chompy as though a large wide open mouth and smacked flatly on the surface of the water leaving a very large concentric circle looping outwards towards my fingers which were dangling over the edge of the boat.
That stopped immediately. 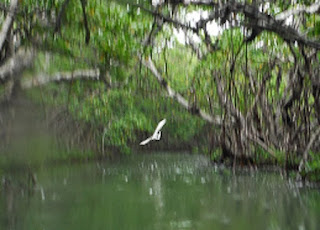 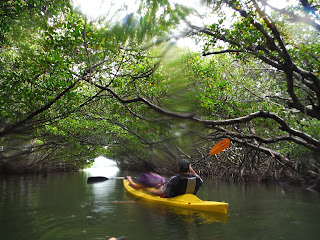 Around two hours later with the rain finally giving way, all six people – still married- and three double kayaks returned to the designated spot. We dined on slightly soggy pretzels and waited for some slightly surprised guys to pick us up.

We had survived the mangrove swamp.
In the rain.

Just like a Hemingway novel...
Again, pardon the raindrops on the lens, it was raining...

If you go:
The kayak across Tarpon Basin is not difficult. You do need to be mindful of power boats when you cross the Intercoastal, which is marked with red triangle numbered signs. It is possible to sail to the entrance area and anchor your boat, cutting down on the distance you kayak.
Be mindful that mangroves are protected - it is a pack in-pack out area.
Posted by LauraEhlers at 10:25 AM