Burlesque:
a literary, dramatic or musical work
intended to cause laughter...


I admit it.
I am a Lost Generation, Great Gatsby-esque addict.
The clothes, the lifestyle. Beautifully refined with a little dirt showing around the edges...
So when I heard about the Boom Boom Room here on the Coast of Illinois, it was pretty obvious where we would be going for our anniversary.
The Boom Boom Room, billed as a 1920's speakeasy with a modern twist, it sits on the corner of 14th and St. Charles street. Just at the edge of the glitz that is Washington Avenue.
Red velvet curtains part as you enter...
Louis Armstrong and Cab Calloway serenade as you are lead to your table...
We chose the dinner and show package.
Our table – linen cloth covered – sat in a corner, slightly elevated which gave us a great view of the stage. Actually, there are no terrible seats. The stage sits center of the room and is surrounded by tables for two and four. There are larger tables slightly elevated on the outer edge, still within easy viewing of the show, although the table of eight next to us needed to turn slightly in their chairs.

The drink menu offers a handful of cocktails named for some of the performers. I chose the Vera Valentina, a slightly tart take on a cosmo. It was a nice way to start the evening.
The drink menu also has a variety of wines – red, white and sparkling. Most mixed drinks were $9-10 each as were the wines by the glass. Bottles are available as well.
Oh, and there is beer.
But come on...a drink named Lolita Love or a beer???

Dinner is served in four courses.
A nice mixed green salad started. Nothing fancy to look at but the vinaigrette was spicy and delicious.
Second course was salmon en papillote.
Oo la la...
A piece of salmon atop sliced zucchini roasted in parchment.
We are both fish lovers but weren't quite sure how a restaurant would get by serving a room full of diners all the same fish. In fact, a couple of women at the table next to our quietly voiced their hatred of fish, prior to the arrival of the plates. Not that I was spying but I don't believe I saw any plates left untouched.
The fish course was also served with a side of Lulu La Toosh...
Mademoiselle La Toosh, whose French accent was clearly from the south side...., introduced the Burlesque Bombshells -three women and one very attractive man- while belting out the opening number from Chicago. The only thing bigger than Lulu's voice are her boobs. But only by a tiny bit. She sang and joked and held the audience captive. Especially the very tall, handsome man sitting directly in front of her...
But anyway,

Third course was an unbelievably tender and tasty braised short ribs atop mashed potatoes, green beans and a side of dance... 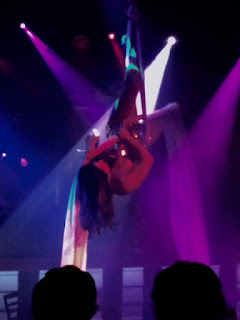 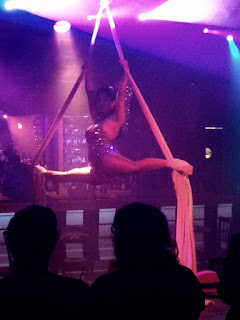 The evening ended with a showstopping fire dance and dessert of what I can only describe as a stripped down S'More.
(Get it...stripped down...)
A smear of toasted marshmallow held the richest, creamiest square of chocolate fudge ganache with a crisp graham cracker base. 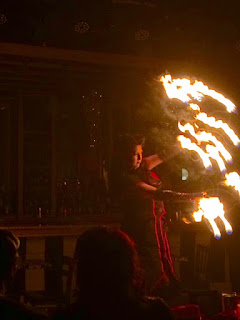 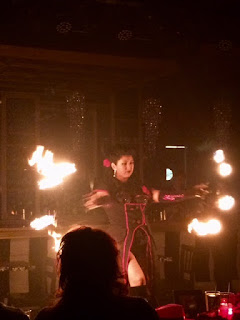 As the house lights came up, the dancers graciously posed for pictures and circulated through the room.
We left pleasantly surprised at how delicious the meal was, how tastefully entertaining the show was and convinced that we would return...with our friends who were TOO CHICKEN to go with us!!
I mean, come on, this isn't Hollywood on the East side. There were no pasties until the dessert course...
The Boom Boom Room is located at 500 North 14th St in St. Louis.
They are open Wednesday-Saturday 6pm-1:30am with dinner shows on Friday and Saturday.
Dinner show tickets run $16-$23 for the show. Dinner is billed separately and averages around $50 per person, not adding in drinks. Seating for the dinner show begins at 7pm and the evening is over around 9:30.
There are also late night shows starting at 10pm, priced at $19-$23.
We did hear a rumor that beginning on Mother's Day there would be a Sunday Brunch show...because nothing says I Love You Mom like a burlesque strip show and what I can only assume will be a buffet of deliciousness.
For more info go to their website: theboomboomroomstl.com

(As always, I must disclose that this review is purely my opinion and was not sponsored by anyone.)
I had hoped to get pictures of all the performers but on review most were just to fuzzy to use. You will have to take my word for it, they were all fantastic!

Posted by LauraEhlers at 7:22 PM