Here at the Coast of Illinois, I am all about creating a little oasis amid the energy-depleting routine of day-to-day life. This is why I have a bright blue deck (well that and the fact that I am pretty sure it drives my neighbor, with the security motion sensor lights that sign into my bedroom window at 2AM, crazy). It is also why I have a gigantic palm tree in my living room and why I favor tropical blue and green eye liner over the more age appropriate brown.

I was recently invited to experience another's oasis. And it was fabulous. This one is a tribute to the Art Deco furnishings of years past. In fact, it is sort of a re-creation of that entire glamorous Deco-Gatsby-Studio Contract- Hollywoodland days. Oh and there was music.

Actually, the music was the real focal point. Through a series of random barroom appearances and the wonders of social media I have been lucky enough to get to know the amazing talent of Sarah Jane and the Blue Notes. Miss Sarah Jane hosted a CD release party and concert on the roof of her uber-cool home which also doubles as that Art-Deco Oasis I mentioned earlier.

A shining bar in shades of pink and black tempted me to take a spin on a bar stool where Clark Gable and Carole Lombarde would have felt at home sipping whiskey.

A raised bandstand glowed in the orange light of early evening, waiting for the Marx Brothers to wonder 'why a duck?'

Halfway up the stairs an Egyptian doorway threatened those who dare enter.

Of course, I didn't actually realize this was the personal HOME of our hostess until I had barreled in the door and began taking pictures.

Once on the roof I was welcomed by banana trees, fountains and an octogenarian flamingo who really wanted to ride home in my bag. Guests milled about sipping wine and admiring the view while a curious helicopter admired us.


The music began courtesy of Tom Byrne and his amazing guitar. Beautiful notes and melodies wrapped around us as the sun set. 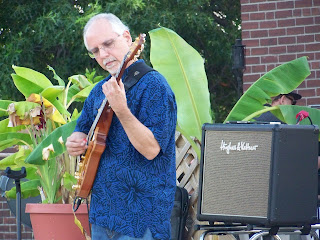 And then the big band started. Three horns, a guitar, bass and drums wailed as Sarah Jane belted out song after song, pulling the crowd into an era long past."Them There Eyes", "Doín' the Uptown Lowdown", "Bei Mir Bist Du Schoen";  Billy Holiday, Bessie Smith and the Andrews Sisters watched from a corner, toasting with bathtub gin, tapping their toes pleased as punch. 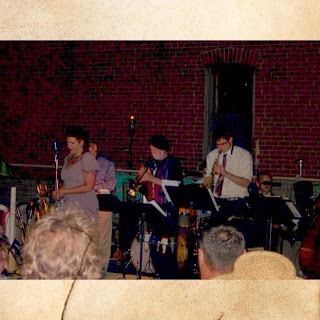 I have always been enamored of the era of Golden Hollywood and big band soirees. I have always been a little sad that the era had passed. But as I left the party, Humphrey Bogart at my elbow and a Paper Moon shining over head it was clear that my Blue Skies were just a twist of fate away.

Sarah Jane and the Blue Notes new CD (of the same name) is available at their live shows or you can contact the band on Facebook. Follow their appearances at reverbnation.

Tom Byrne can be found around the Coast of Illinois as well. Check his webpage for details.

As for me, I will be sipping a daiquiri on the Coast and keeping a weather eye towards the next opportunity to take a step back in time.

Posted by LauraEhlers at 6:55 AM