Three years ago, on the tenth anniversary of the 9/11 attack, a young acquaintance of mine wondered at the significance of ten years. Is the loss any smaller this year than last? Will it be less next year? The truth? No.
Let me be clear here. I did not lose anyone in the September 11, 2001 attack. I spent the day in the safety of my home, watching the devastation on television. But loss is tricky. My husband called me on his way home. He told me to go outside and listen. It was silent. The normal air traffic had stopped and we were surprised at how obviously normal that noise had been. I baked cookies for our kids. I worked that evening and I wanted their arrival home to feel normal.
I worked in an emergency department back then. None of us lost flesh and blood but we all lost family. All you had to do was look into the eyes of every fireman, EMS worker and police officer that came through our doors that night. We all saw the look of quiet anticipation on the faces of the emergency workers in New York – the chaos at Ground Zero, the IV bags spiked, the stretchers lined up – waiting for casualties that never arrived. But we went about our jobs that night as though nothing had happened; keeping the doubt, fear and questions pushed back for another time. And that connection, with those waiting- hoping to do their job as though nothing were different but never given the chance - changed me.
Loss is tricky. What we lost that day was the normalcy we had grown up with. The safety of being 'an American'. For our children, normal began on September 12, 2001. They will never know the 'normal' that we had. Suddenly phrases like 'home land security' and 'terrorist threat' became their norm. For our children, our country has always been at war.
But while we lost the definition of our 'normal', we did not lose our Freedom. Sure, we may have to practically strip down to board an airplane. But we are still Free to complain about it. We are Free to gather together to celebrate football and baseball and pop music stars who are suppose to be our next 'idol'. We are Free to question the banking industry and point fingers at our elected officials and say "What the Fuck?" And we are Free to come together and remember.
No, loss does not change with the number of years. But what is 'normal' most certainly does. And that is something we must never forget.

The following essay was written five years ago on October 25, 2009. A few days prior, I found myself on a different part of the Mississippi River coast and quite by accident was witness to the scene above. I don't know why I happened to be there at that moment in time. I am not a particularly 'political' person. I did not lose anyone in 9/11. But as an ER nurse I felt a painful connection to those in service in New York and Washington DC. I guess THE COSMOS is throwing me a hint, but I am not good at guessing games.  I do know those images will stay with me forever and there was something calming for me to see the people waiting for the ship.There was an overwhelming spirit of America. But there was also an overwhelming spirit and desire for peace.
And still we wait.....

The rocks on the shore of the Mississippi are damp and the path is precarious. The atmosphere meets the muddy water and shrouds the banks in fog. The humidity of the October morning has dampened my clothing and my mood.

Stretching out for at least one mile, the riverbank is lined with people. Some are sitting on rocks or grass. Some stand. One man, dressed in the Stars and Stripes and waving a huge flag has taken the anchor position in the crowd. 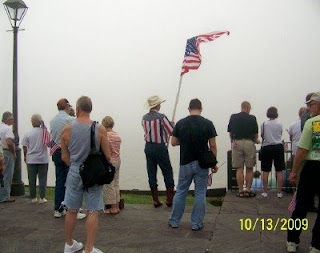 We are all waiting for the US New York to float past us on its way to New York City for commissioning. The warship has left the shipyard where it grew from the melted remains of the Twin Towers and our naive country’s sense of safety.

We all wait, straining our eyes across the foggy river that defines this part of the United States and I consider my place here.

I sat in the Café du Monde, the evening before, surrounded by family and friends. We talked and laughed; attended by a Chinese man who barely spoke English. We read aloud our writings – poems of life, stories of love and protests of war. We read aloud for ourselves but not unnoticed by those around us. And I wondered, just what does the Chinese waiter think.

We are here, reading aloud in a public place, presenting our opinions and the response is laughter, and smiles and applause. In his country such a display holds the possibility of prison, torture and death.

We wait for the ship. Peacefully gathered. Civilians and police mingle and the atmosphere is celebratory but it is also bittersweet. Waiting. 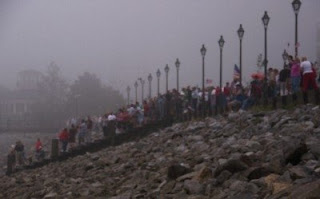 I remember an image from the early hours after the Towers fell. Hospital workers in ER bays, IV’s spiked and empty stretchers – waiting. The distressed faces of the staff haunt me. They reflected the reality – those stretchers would remain empty. Would it have been better to have had them full?

Silently, the US New York slips through the fog and collectively the crowd is on its feet. Flags are waving and a band plays in the distance. I am overwhelmed with pride. We never catch a clear image of the ship. The fog on the river shrouds it behind a veil.

As the ship makes its way around a bend I see the silhouettes of the crew. They stand aft, waving back towards the shore. A chill runs through me as I feel the souls of those that are gone. Do the people here on the banks feel it? They must, the banks are silent. Does the crew feel it?

And I wonder, was a warship really the best thing to come of all that loss?

Email ThisBlogThis!Share to TwitterShare to FacebookShare to Pinterest
Labels: 9/11