For Pete's Sake! Close the Door!

There is something watching me as I sit here in the kitchen writing. It is quiet now but there have been footsteps, open cupboard doors, shadows where there is no light...
It may be her story...
But this is my story too.

We were in the house about four months. Nothing special, except to us. Oh, the previous owner had passed away; 'dead before she hit the floor' according to our neighbor. Which was no surprise given the amount of nicotine on the kitchen tiles and living room curtains. At least she liked to read. Along with all the nicotine stains the previous owner left a makeshift library in the basement.
We replaced the curtains, chipped away the tiles and added a faux brick wall. The books were donated to Goodwill, except for a copy of Lady Chatterley's Lover and a vintage Escapade magazine featuring some B-List actor's wife as the centerfold. The previous owners not only had a penchant for smoking. Apparently they also enjoyed light pornography.

But it was our house now.
Nothing special.

My husband was at work, night shift. I was alone. Well, not exactly. Baraboo, our cat was there. Not exactly with me. She was never that sort of cat. But she was in the house. I went to bed with the plan of a good night's sleep before a big day of gardening.

I sat up again. The smell was faint. But there was something else. A sound. Soft and fluttery, like the sound a page makes when it is turned slowly in a movie. My initial thought was how ridiculous it was. I had spent the past twelve weeks removing the previous owners remnants.

And then I heard the book hit the floor.

I quietly got out of bed and slowly walked to the doorway. I flipped the light switch and illuminated a nearly empty hallway. Baraboo sat at the far end, staring down the steps to the basement. She turned her head, the way a cat does, her expression a 'well, let's get this over with'.

I walked to her side and flipped the stairwell light. The house was a split level. Four steps down to the landing and then another switch to flip.
Pause.
An invisible smoke curl and pages turning.
Four steps to the basement.
Flip a switch.
We were using the basement as a catch-all of items waiting for permanent spots once this level was finished. An old couch looked toward an as yet uninstalled wood burning stove. Several boxes towered in one corner. The leather front bar, a 'bonus' piece with our new upstairs furniture waited to be stocked, the bar stools sitting empty.
No smoke in sight.
No book open to a telling passage.

One last switch and the back of the basement lit up. Empty metal shelves lined one wall. All empty. Not a sound.
Not a smell.

I shook my head and looked down at the cat who gave me a look which said, "what is wrong with you. There's nothing here."

"Come on Boo. You're right." Together we turned and reversed our course. Lights flipping off. Rooms bathed in darkness as we made our way up the stairs. At the mouth of the hallway, the cat took the lead. Walking gracefully down the middle of the carpet, stopping before each open door, surveying the shadows cast by the hall light, then moving on. I followed along. One eye on the cat, the other on my bedroom at the end of the hall. Four doorways in between.

Bedroom on the left. Clear.
Bathroom on the right. Clear.
A second bedroom. Clear.
At the powder room door Baraboo stopped, I did the same. But rather than calmly sniffing the air and moving on she took a step forward. And with a low growl, she hunched her back, hair bristling from neck to the end of her tail which now stood at attention. Her tiny paws lifted her off the floor in a sideways dance as her growl became more intense.

My circulation stopped. Cold grabbed hold as every nerve in my body began to quake. Grabbing the cat I bolted for my bedroom, slamming the door and diving under the covers in less than three steps.

I never did look into that bathroom.
In my mind I heard our neighbor....'dead before she hit the floor'...
Only I would have a ghost who makes it's first appearance smoking and reading while on the toilet.
HAPPY HALLOWEEN!!! 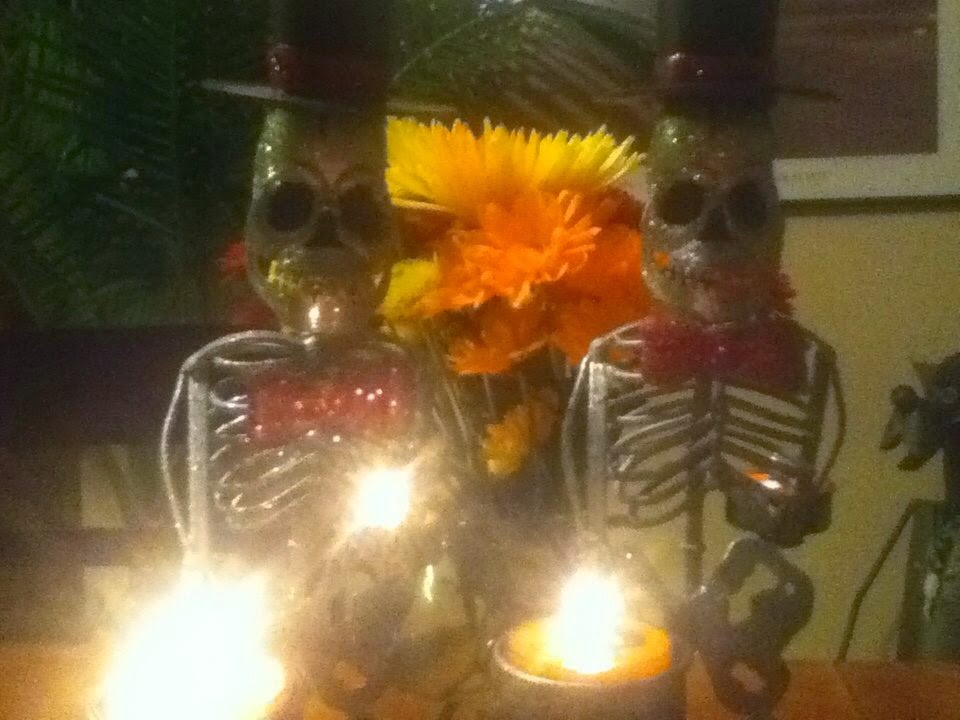 Hope you have enjoyed this month of scary. If you have stumbled over here to the Coast then check out these links on the right.
And come back next week when the Coast of Illinois returns to it's 'normal' ridiculous self. Scary, but only because these ridiculous things really do happen to me.
Daily.
Posted by LauraEhlers at 6:45 AM