Well, it's that time again.
The air is brisk, pumpkins are on the doorstep, my kleenex box is decorated with an adorable owl in a pile of leaves.
It's October.
And here, on the Coast of Illinois, that means...da.da.duuuuummmmm.....
it's scary story time!
Last year we followed the antics of some friends as they waited for the birth of a new baby. (click here for the beginning of that series and follow the subsequent links on each installment.)
This year I will haunt you with a variety of short stories, designed to give me the chills and hopefully you too!
(And, if scary is not your style, no worries. Check out some of the awesome links to the right. And come back in November for more stories from the Coast...of Illinois....) 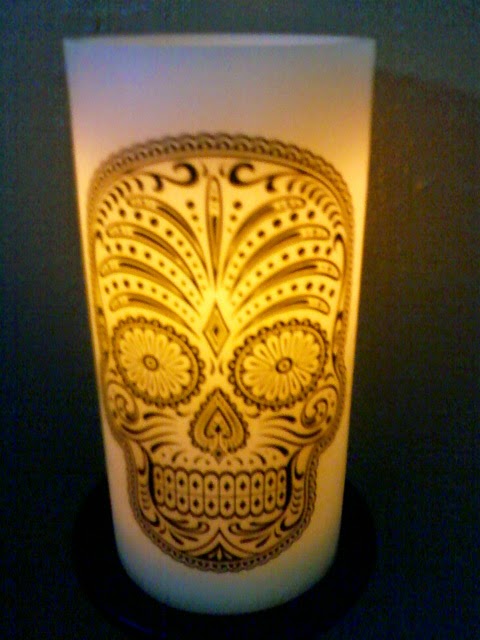 I am sleeping and in my dream I sleep. I am curled tightly on my side, my eyes closed but behind the eyelids I can see the door. I feel a noise, the sound of one hundred eyelashes closed in a box, under the bed. They flutter gently and I open my eyes. The doorway is defined by dark gray lines. A light from somewhere else brightens the doorway very faintly and an image is there with the blink of my eyes.
He is tall, nearly filling the door frame yet light still pours around him and into the room. Or does it pour through? He stands still, questioning, and I know it is time but I am not ready. His image flickers and wavers towards me like an old cellophane movie on a reeled projector. I squeeze my eyes shut tight but he is behind them so what really does it matter? With my eyes closed he seems solid and even more real. He speaks then, as if to coax me to open my eyes.
“It’s time to leave.” His voice is the melody of those fluttering eyelashes and sounds as translucent as his image in the door frame. “You have been waiting. You can’t deny that.”
I never know when he will arrive. I notice him first as a shadow from the corner of my dreams. Off to one side, he observes. Gradually, his image gains substance as my resolve thins.
I refuse to answer and peek from barely opened lids. His featureless face is directly in front of me and I squeeze my eyes shut again, but too late. Behind my eyelids his face evolves with sunken sockets, a thin nose, a harsh mouth that opens with a gash and just as quickly, it is gone and he is translucent.
“What are you afraid of?” he asks although he knows the answer. “You’re not afraid of me. What is it?”
A shiver overtakes me and I feel the first droplets of perspiration on my brow. I am cold and hot and weak and stiff as I answer with a throat so dry my voice is barely heard above the opening flutter of eyelashes, “I am afraid to learn what I am capable of.”
My demon laughs then and my eyes fly open. Briefly, in the doorway, is an image lit from behind. I have never allowed him access here, outside my dreaming eyes. In a flickering, wavering moment I understand. He is loose now. And all I can hear is the sound of one hundred eyelashes in a box under the bed as they flutter.
I am dreaming and in my nightmare I am Awake.


(This first appeared in 2010 on 69 Flavors of Paranoia. Sadly, the site is on hiatus, but that shouldn't stop you from knocking around in the corridors, just watch out for the basement...)

Posted by LauraEhlers at 6:50 AM