Sailing and the Tropical Depression formerly known as Hurricane Bill

You would think, as long as I have lived on the Coast of Illinois, that I wouldn't be surprised by anything that happens around here. But then, this happened:
I know. I have been talking about sailboats ever since the Coast came into existence. But I have to be honest. While I knew the reality of our wooden boat was inevitable, I really never believed that one day I (capital, italics, bold, exclamation point) would be steering anything larger than a modified bathtub.

Rob, who clearly has way too much time on his brain, has nurtured the idea of learning to sail these big boats in preparation for round two of our lives where we charter and sail every body of water out there including but not limited to Gulfs, Seas, Oceans and Sounds. Oh, and Lakes of Greatness. Being the supportive wife, I have let him ramble on about boat types, mooring balls, tidal maps. I was more than happy to take a trip to Tortola and earn my Sailing 101 certification. But the thought of taking the more difficult 102-103 classes, where you learn things like navigation and diesel engines gave me a strong desire to go shopping and have pillow fights.

For those measurement challenged out there – 36 feet is the length of a telephone pole, twice the height of an average giraffe or five times the height of Shaq – that would be 5 Shaqs, laid end to end.
This was one big ass sailboat.

We rented the boat through the Ozark Yacht Club. (Okay. I know. Brings to mind a group of those Baldknobbers People in overalls with one strap, a hat with a hole in it, a corn cob pipe and a whole bunch of bass boats. Well, stop it.) The Ozark Yacht Club is just off the Bagnell Dam Strip (where there ARE Baldknobbers in overalls plus nearly as much neon as Las Vegas and the largest population of salt water taffy west of the Mississippi. The club is nestled in a wooded cove, down a frightening hill. It offers several beautiful rental cabins as well as a wine bar, an award winning cafe, a small beach, a swimming pool and a full service marina.

It is also the home of some enormous, expensive boats. All of which I was certain would zoom from their slips and into our path as we maneuvered our boat for the day out of, then back into it's slip.


After Bert from the marina gave us a tour and run down of the boat's controls (it had a diesel engine and AC/DC power although the galley and head were not functional for our visit) we grabbed some big ass sandwiches from the cafe and prepared to cast off. Once out of the marina and in the main channel, I put the boat in irons and Rob hoisted the main sail.
This is when it started.
I was at the helm, the boat pointed directly into the wind. As the sail went up the boat began to gently, but firmly move. I made constant adjustments to keep our direction. We wanted to start off slowly to get a feel of the boat's capability. It was quite clear. Mariposa wanted to sail. The power of wind and vessel is impressive. It demands respect.
It had taken hold of me.


Rob took the helm and turned us to a close reach, wind over the port. I hoisted the jib and we were off. Not too fast, but moving.
No motor.
Just wind.
There is no feeling like it.
This is where the Tropical Depression formerly known as Hurricane Bill comes in. You see, Missouri, Texas and it's Hurricane are only one panhandled state apart. Which means the Coast of Illinois hosted tropical depression rain for five days straight. Including the Wednesday we were planning to sail. In fact, it rained on us for the entire 4 hour drive. I kept repeating 'rain before 7, stop by 11'.
And it did.
Until 3pm.
Maybe 1pm, I really have no idea. By this point I was so wet my eyeballs were blurry. Thankfully, there was no lightening and the wind was quite gentle which was a good thing as we were already under sail. (Safety Police alert – Rob had done his captaining work and triple checked the weather, reviewed our plan with the marina people. There was a radio on the boat. We had raincoats and life vests at the ready.)

For nearly four hours we shared the lake with two other sailboats and a couple of jet skis. The lake was calm, the wind fairly steady but gentle. We topped out around 3knots. Not very fast, especially for a big boat with it's sails full out. But plenty fast enough for someone who is incapable of judging distance on the water and has an over-heightened fear of destroying someone else's very expensive boat, dock, house on the shore.
As Rob pointed out many many times, I can drive a car. If something is coming at me in a car, I turn. Same with a boat. But here's the thing. A boat doesn't have a break. I can't slam on the pedal with both feet and STOP. Sure, I can turn the boat into the wind (in irons) or just drop the sails and it will stop (nearly)dead. I have had a lot of experience doing this, by mistake.
I spent an equal amount of time grinning like an idiot because I was so happy and wishing I had a prescription for 1million Xanax because my anxiety over destroying something was higher than the 40 foot mast.
This is something I may need to come to terms with.

The desire to continue on past one more cove, around that next corner was strong. So was the wall of rain we could see further down the lake.
We returned to the marina without incident. Unless you count my sudden urge to BUY the boat, which just happened to be for sale.
I got over that as Rob listed the number of things needing 'upgrading' and the cost of each.

Our hope had been for a full live-on-a-boat experience.
As the boat was not outfitted for showers and cooking, we used the club facilities. (No. Not an outhouse and garden hose.) The Ozark Yacht Club provides it's members, and boat renters, a fully equipped club house. We had our choice of several private bathrooms – each extremely clean. The club also has a full service kitchen and a club room connected to a long balcony with tables and chairs. (These amenities were not part of our access, which is not to say I didn't 'investigate' them. All very clean and void of anything made of corncob.)
We had dinner at Lil' Rizzo's, an Italian restaurant about 15 minutes away. We have eaten here several times on trips to the lake, each time finding the place completely by accident. I can only believe that Lil' Rizzo's is actually a mobile figment of my imagination which just pops up when I am starving. House salads, light, flaky, herb-y dinner rolls, spaghetti with meatball, supreme pizza, a glass of wine each – yum!
On the way back to the boat we stopped and grabbed desert at Pete's Market– chocolate covered graham crackers.
Rob and I both spent time in the Ozarks as kids. We have both skied the lake behind power boats until our arms were ready to fall off and our hands couldn't let go of the tow rope then passing out dead asleep in shared cabin bedrooms or tents.
That was the kid us.

The grown-up us spent the remainder of the evening on deck with a glass of wine, reading and just enjoying the quiet lake. Oh, and this: 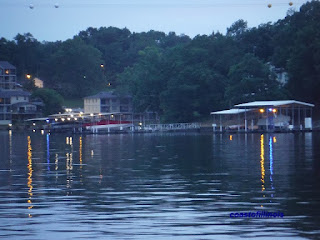 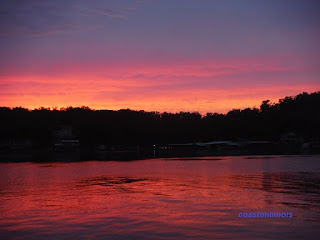 And for about 30 seconds, this: 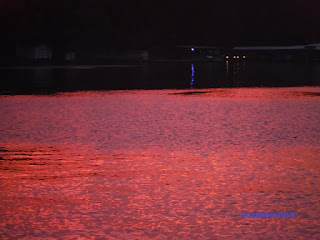 Because of the threat of rain overnight, we opted to sleep on the fold-down table bed in the center of the boat where we had a fan. We chose to ignore the fact that the metal mast (lightening rod) ran through the corner of the bed by Rob's feet.
Our morning looked like this: 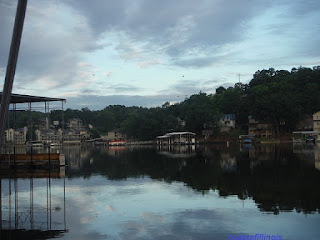 Rob went on a coffee run and I sat on deck with my book, watching a fish jump and a duck quack its way around the shore. One of the best mornings ever.
And that's when it really happened.
I know now. Deep down, so much that I actually read and enjoyed an article about installing a water maker on a sailboat, that this is something I want to do. Not because someone else wants it.
But because I want it.

That is an amazing feeling.
Sort of like sailing. 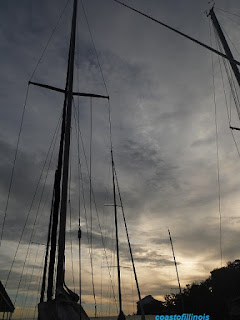 Of course on the way home, this happened:
Who knew the Coast of Illinois would actually become a real Coast...

For the purpose of full disclosure – I have no financial gain to be made from any of the mentions above. Sadly. I would even be willing to be paid in boat rentals. And those flaky, herb-y dinner rolls.

Check out the Sailing Page – there is an awesome video documenting our evolution to sailors, courtesy of my Dad. Thanks Dad! Oh, and one of my favorite songs – Morning Coffee - by my brother, musician, Karl Schloz.
Posted by LauraEhlers at 11:01 AM