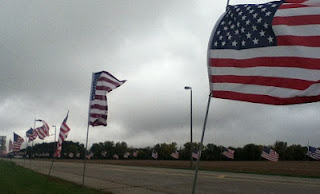 It is the unofficial beginning of summer and to that end, prep here on the Coast of Illinois has been in full swing. (Think ten cubic tons of mulch and a small loan from the local nursery.) Consequently, I have been so sore from digging I have been unable to lift my arms to type. Or I have been too preoccupied with reading Padma Lakshmi's new autobiography and watching The Night Manager.
Whatevs.
Memorial Day, while always about remembering our Veterans, has long been a semi-secret competition among the people here on the Coast of Illinois. A sweet, well meaning competition, and absolutely a sincere event, but a competition none the less.

So if you see me coming at you with a flat of any of the below mentioned flowers, I suggest you run.
But not into traffic.


Marigolds, petunias and geraniums. That is the hierarchy, the rank, if you will of which flower goes on which grave. Marigolds are for the distant relatives, the ones that have been gone the longest. Petunias are for the next in line- cousins, step family and 'the baby graves'. Geraniums go to the top ranking relatives – parents, grandparents, the favorite Aunts and Uncles. They also go on the yet to be filled graves that belong to the double headstone relatives. The ones that plan to be buried next to their spouse (or favorite spouse in the case of one Aunt) but who may not be quite dead yet.

I learned this class system early in my childhood. Every May I would accompany my Mom on a tour of The Cemeteries. We would pack the trunk of the car with jugs of water, small garden shovels and flats of fresh flowering plants. East Cemetery was mostly Mom's relatives. The West Cemetery mostly Dad's. It was also the final resting place of those sad yet scary 'baby graves'. I always preferred the West Cemetery. It sat on the top of a large hill – nearly unheard of in the middle of Cornfield Illinois, and felt spacious and airy. The East Cemetery felt older, more enclosed with its large oak trees and winding gravel paths. Plus, from the top of the West Cemetery I could almost make out my grandparents farm and it was fun to see the place where I had many adventures from a different vantage point.

The Decoration Day ritual was an adventure when I was young. It became a chore when I grew older. When we had to drive ninety minutes to reach the cemeteries it was the definition of dread. Yet, as we began to divide up the flowers and dig the holes and soak them with water my attitude changed. Mom would tell the stories: this was the great great uncle from the Civil War, here was The Favorite Aunt's second husband, who ran out the back door when her first came in the front. Over that hill was the sweet great grandma, who's husband was murdered in a robbery. And here is the resting place of grandma's sister. She was never given the title of Aunt. A child who dies at the age of five because it took too long to acquire treatment for rabies earns a special place in history instead. One after another, the headstones would be anointed with history and flora. If Mom took too long to get to a favorite story we would ask. 'Now who did those babies belong too?' 'Which one of these guys died from a ruptured appendix?' Leftover flowers would go on some of the plain stones in 'Potter's Field' where the drunk was buried. Seriously, how can you not remember a guy named 'Commodore'.

The decorating needed to be done well in advance of the holiday so everyone could see that there were still living family around. But not too early – the flowers had to stay fresh. Heaven forbid we use those 'tacky' plastic flowers and don't get me started on the horrifying pictures which sprang into my overactive brain at the mention of 'grave blankets'. After walking gingerly around the stones, diligently placing the correct flower in its place we would stop and survey a large empty space on the eastern slope of the West Cemetery. There - enough empty grave sites for each of their immediate family. Here, it was noted, was where my Grandparents had saved us places.

It has been many years since I went on the grave decorating expedition. I do take the opportunity each year to share with our kids the stories these trips bring to mind. However, I have omitted the information regarding the available graves. Frankly, I prefer to take my chances with the seating arrangement for my eternal rest.

And also... I prefer daisies.


Memorial Day is also one of the most dangerous holidays on the road. PLEASE  WEAR YOUR SEATBELT AND DRIVE RESPONSIBLY - this includes but not limited to NO TEXTING! Don't let your holiday end like this:
This post ran on Coast of Illinois on Memorial Day 2013. I originally wrote it as part of an essay challenge on a long gone writer's group. Come back later this week when, I promise, there will be new, original and hopefully hilarious material.
Posted by LauraEhlers at 8:39 AM