With alarm clocks that go off at 5AM-ish, it takes a lot to get me and my husband to stay awake past 9pm on work nights.
Enter 'The Night Manager'.
Thanks to John LeCarre's novel of international intrigue and those television geniuses at AMC, Wednesday mornings are pretty rough.
The 6-part series based on LeCarre's book is wonderfully written, exquisitely acted and beautifully filmed.
Plus it is just the right length. Six parts is just enough for people like us who have commitment issues with anything other than smartly written then cancelled comedies (Cougar Town/Happy Endings), shows about zombies (Walking Dead,ONLY!) or Hockey Playoffs (Let's Go Blues!).
(I feel I must point out here that the NHL playoffs are WAY past 6 episodes.)
Anyway...
The Night Manager has given us a bright spot leading into mid-work-week entertainment. It is overflowing with luxury, romance and danger! ~said with a uber fancy, unidentifiable European accent.
It has also sparked some fabulously stimulating conversations:
Why would you screw around with the 'new' guy when the wealthy bad guy is not that bad looking, has all the money, and will probably kill you?
Is our living room bigger or smaller than the interior of that private jet? Really? So it's about couch size?
How can you NOT shout from that balcony looking over a crowded street in Istanbul - 'Why DID they change it?'
I don't want to sound ungrateful. I have a wonderful life. But it is so fun to consider the possibility of jetting off in designer caftans to eat lobster salad which has been commandeered by the boss's number two guy.
Or actually shopping in that jewelry store that sells those gem studded animal pins. Not that I have much use for gem studded animal pins.
But I could totally get use to lounging by the pool at my Majorcca compound overlooking the Med.
So in an attempt to counteract my lack of exotic locales and glamour, I have vowed to start carrying around a briefcase with fancy locks and answering my phone with the greeting 'Hello Ducky!'
Yet that doesn't change the fact that the only international intrigue I have is ' How did this get here???' 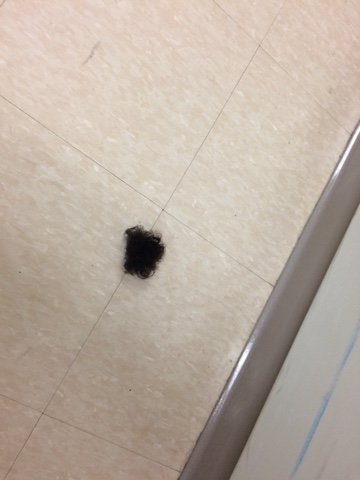 This is a hairnet. Seen lying in wait by a work elevator. It seems they have started a counter-insurgence. I hear through my sources it goes by the code name Spiffy.
Write you next book about that LeCarre!
Posted by LauraEhlers at 5:55 AM