If you haven't figured it out yet, the Coast of Illinois is pretty much dead center in the middle of the United States. With all the ocean pictures, it may be hard to believe. But the nearest salt water is about 14 hours away by car.
Which means that most of our sailing is done on lakes.
I am not complaining.
We have an abundance of wonderful lakes within an easy drive.

Our first sailing forays were on Creve Coeur Lake just west of St. Louis. It is surprising to find this lovely little lake so close to the city. It is the perfect size for a small boat and inexperienced sailors, especially because there are no large motors allowed. The lake has a pretty active racing club, although we have never raced.
We have gotten in their way.
Prior to the fixer-upper, we took the 90 minute drive to Rend Lake in Southern Illinois. A slightly larger lake which means slightly larger boats and much larger motors. I really enjoy our trips to Rend Lake. A little busy in the dead of summer, in the off months it is peaceful and beautiful.
Lake sailing can be a different sort of challenge compared to ocean sailing. With land being so near, the wind is greatly influenced by not only the trees and shore shape, but also by the heat of the land. This results in what I have named 'Ghost Wind'. Ghost Wind is when, for absolutely no reason, the wind shifts from a nice port tack to an in irons, stopped dead over the bow gust.
This usually happens just as we are having lunch.
Which has led to some interesting conversations when I am holding the tiller.
On occasion, we have been known to make the 8 hour odyssey which is, according to the google maps, actually a 5 hour drive, to Lake Monroe in Bloomington, Indiana.
Bloomington is home to Indiana University.
And also John Cougar Mellencamp.
Whose house we may or may not have stalked from our boat, as it conveniently sits on the lake...
The reason for this drive is what small boat sailors know as a Messabout.
The Messabout, named from a line in the Wind in the Willows, is a gathering of small boat enthusiasts.
It is a weekend of sailing, conversation mostly revolving around epoxy, and food. We have met some wonderful people on these messabouts.
They are also a weekend of camping next to an entire school of college students who have no tents, bring only doritos to eat and talk all night about who slept with who and who came out to who, within five feet of our tent.
So. Much. Fun.
Our fixer-upper, Cool Change, lives at Lake of the Ozarks.
By default as it has no trailer and I doubt that our car would be able to pull her up the hill from her dock. 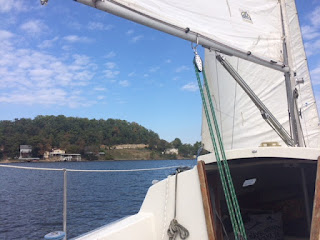 Lake of the Ozarks is the largest man-made lake in Missouri. It was the first place I learned to water ski and has a rich history of family trips for both Rob and myself.
These memories had a lot to do with us finally deciding to buy a 40 year old sailboat.
With no trailer. 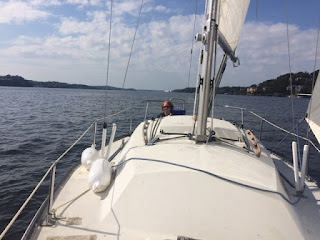 The Lake is a three hour drive, which can be a pain at times, but in reality forces us to take an entire weekend off from the everyday. It is close enough that family and friends are also willing to come on down for a sail followed by some surprisingly delicious food from some tiny restaurants in the middle of the Ozark hills.
(Don't believe everything that show Ozarks tells you about the area.)


And while I much prefer a salty breeze and the crash of turquoise waves, having the people who mean the most to me on the boat is really the best reason to sail.

This post is part of the A to Z challenge. For more posts from other writers click here: a-to-zchallenge