When the Boat gives you Sails...

We knew, when we got the fixer-upper sailboat, that she had been used for racing. It was no surprise, as we unloaded the sails that there were a mainsail, a jib and a genoa – which is an extra big sail which replaces the jib when you are hoping to catch even more wind. These are those beautiful big sails that billow out on the front of a sailboat.
We weren't ready for the two extra sails stuffed in the bag, giving us a total of FIVE sails! All with 'Cool Change' labeled on them and identical racing numbers.
What a bonus!
All were in moderately good shape, a little dirty and with a surprising number of wasp nests attached here and there.
All except one of the extra large jibs.
This poor sail was most likely original to the boat. It was still in one piece, with no tears or holes but it was as soft as a well loved blanket.
I a pretty sure I heard my 33 year old Kenmore portable sewing machine wimper when it was suggested that I use this old sail to make some tote bags, which sell on the internet starting at around $100!
Historically, sails were first made of 'duck', an evolution of the word Doek, which in Dutch means cloth. Duck cloth was cotton, linen or hemp.
Cotton sails were lighter but did not hold up to the sunlight and salt water like linen did. However, linen was heavy and as sails became larger, linen was less convenient.
It is important for sails to be strong, when pulled in any direction, without stretching, both in the moment and long term. That strength and stretch must also not be affected by folding. They need to resist breakdown under UV light and they need to be cost-effective.
These days, sails are made from nylon, dacron, kevlar and a few other man-made materials.
From the feel of the sails for the Fixer-upper, I would guess these sails are nylon and maybe some well worn dacron.
Very different from the brand new dacron which Blue Skies' sails are made. That brand new material is a cross between plastic and steel.
A real challenge for my 32 year old Kenmore machine.

But this old sail material was so soft, and those bags sold online were so awesome, that I had to give it a try.

I learned to sew young, making Barbie clothes on a handcranked, kid size machine then graduating to 4-H circle skirts and shift dresses on Mom's machine. I have made a wide variety of items, from kid clothes to curtains and those very crisp sails.
The bags were a bit of a challenge, only because the construction process was so different. Time spent in a duffel bag in the boat yard left this sail pretty dirty.
Cleaning sails is a challenge. They stand up to water but you need to be careful what soap is used as you don't want to break down the fibers. We initially spread the sail out on the deck and hit it with the hose. I very gently scrubbed the bad spots with a Dawn dishwashing liquid diluted in warm water.

Later, after a watermelon juice spill in my train bag, I threw the whole thing into the washer on gentle with Woolite, tossed it in the dryer for about 10 minutes then hung it to dry.
The fabric came out nearly like new.
Further bags have been prewashed prior to cutting and sewing.
Each bag I have constructed has been a little easier with the flaws from the previous being repaired in the next.


I have also tried to incorporate as many interesting parts of that old sail as I can which means a very detailed process of lying pattern pieces to catch some of the old stitching or one of the racing numbers and in the case of my daughter's lunch bag, one of the hanks used to attach the sail to the forestay. 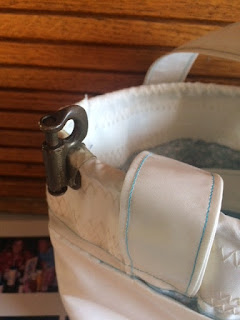 It adds a bit of character to each bag.
And that seems like a wonderful way to honor the character of Cool Change, and all those vessels that have gone before her.

Posted by LauraEhlers at 8:33 AM

Email ThisBlogThis!Share to TwitterShare to FacebookShare to Pinterest
Labels: a to z challenge, sailbags, sailing, sails