Navigation, for Those who really only want Lunch

Navigation in sailing, or any other type of water sport, is complicated.
There are maps, charts, lights, rules, exceptions to rules, more rules...

I try, really I do, to pay attention to all this navigation stuff. But, until we are actually cruising on a course which will take us to and from Portofino to Nice and I am on first watch, all those numbers and circles and lines and arrows put me in a geometry coma.
Just point the boat in the direction of lunch.

That is all I need.

That being said, there are two navigation aids which I do pay attention to.
Mostly because these mark the way to lunch.
I am talking about the channel markers.

If you have been on any body of water you have probably seen them.
Those red and green buoys bobbing around.
They come in varying styles, depending on just what they are marking, but the colors are always the same.
Red nuns. 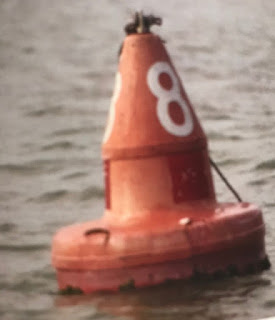 Green cans.
Yes, you read that correctly.
Nuns.
Not the habit wearing, ruler weilding nuns.
Although, if you are so inclined, you may say a prayer or two taught you by said nuns when trying to get back to port.

I had never heard the markers referrenced this way until Toddy, our English Navy sailing instructor, explained.

Nuns are pointy, like the old style hats sisters wore. They are numbered in even numbers.
Cans are green, and by process of elimination, numbered in odd numbers. Like the number Seven. As in 7-up. Which is in a green can.....
Toddy was a genius at explanation.

The numbers tell you how many markers there are going into and out of the harbor to open water. Sort of like 'go to the last stop sign then turn left' logic.
They don't mark miles.
Mile markers are a completely different marker, and from my experience are purposely hidden along the shoreline making it really difficult to figure out where the turn is to get to lunch.
And they don't mark depth.
That is also a completely seperate set of numbers on the nautical map.

Are you beginning to see my problem here?

Luckily, sailing instructors are aware, Toddy was no exception.
From the beginning he taught us the universal sailing haiku:
Red
Right
Returning
When you are returning to port, or traveling through a channel, you always keep the red nun on the right (or starboard) side of the boat.
Unless you are studying for the British Sailing class, which naturally keeps the red nuns on the left.
I don't understand.
But I will not be sailing, or driving, in England.

The green cans get no haiku.
You just have to use the process of elimination and keep them on the left. Or port side.

And that concludes Navigation for those who are really only interested in getting to lunch.

This is part of the A to Z challenge. If you want to read more entries click here: a-to-zchallenge

Email ThisBlogThis!Share to TwitterShare to FacebookShare to Pinterest
Labels: a to z challenge, navigation, sailing