I see Hairnets. Everywhere. Well, not just Hairnets. Toilets broken in half, raw TV dinners – lean cuisine to be exact, a kid on a bike carrying a human head... (Okay, it turned out it was just a Halloween mask with a full head of hair, but still.) I have taken to noticing some unusual things along the side of the road. But the most consistently spotted and most disturbing of all are the Hairnets. It started back in July of 2009. During the four block walk to the parking garage I counted no less than eight discarded Hairnets. They lay like tiny hair encasement tumbleweeds on the broken sidewalk. I could almost hear the beginning strains of High Plains Drifter.

During the next two months I began spotting Hairnets everywhere. At first they were only out of doors, lying on the sidewalk or huddled in a corner by the steps, sharing the warm air duct with last night’s homeless guy. Then they began to move in doors. I found one flattened on the up ramp of level six. (Bad parking day.) There were several congregating in the stairwell leading to my department. A particularly bulky one was lounging on the bench in the lobby. My sister even found nonchalantly riding the Metro! 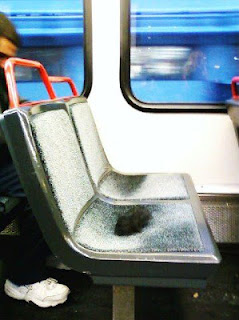 Then the biggest sighting – an entire half head of hair was spotted lying in the on-coming traffic lane of Duncan. A Hairnet drifted past. Later that day, a co-worker found not one but two surrounding her parked car. They were gathering. We were scared. I began to arm myself with Aqua-Net and we instituted a ‘Hairnet security rating’. Sightings decreased. It was as if they knew.

I was lulled into a false sense of security. I left work one Thursday night, late and alone. I had been warned that it was unsafe but I did not heed the voice of reason. As I entered the elevator vestibule for my ride up to the down ramp of level four I spotted it. The net was medium build but with a heavy mesh. It sat in a ball directly in front of my elevator. I eyed it warily as the door opened and stepped around it in what I hoped was a nonthreatening yet dominating manner. Once inside the elevator car, I frantically pressed the door closed button while giving a sympathetic smile and shrugging as the doors inched shut. I hoped my expression said “so sorry, I am pushing the button, it just won’t open back up”.

The net was still there the next morning, waiting…

Sightings of Hairnets are on the rise! I have people out there – on the front lines – sending me pictures and it makes me wonder, if we are just now seeing Hairnets...just what have we been MISSING all these years.
You are probably thinking - wow, a little over dramatic. And what's with the capitalization of 'hairnet', come on, its only a hygiene assistance device. Well...that's exactly what this poor person thought:

Posted by LauraEhlers at 3:02 PM