Pepperidge Farms – I salute you.

You have refused to cave to the pressure of 'super sizing' and still maintain that your tiny boxed, frozen cakes serve eight when it is quite clear it only serves four.

I purchased a Pepperidge Farms frozen Red Velvet cake for dessert this evening. I was briefly tempted to bake an actual red velvet cake but given that is has been hotter than Mathew McConaughey's shirtless chest here on the Coast of Illinois, I eschewed the apron clad heat of the oven and took the instant gratification of the prepared cake.

As a child, Pepperidge Farms cakes were a delicacy. I was lucky enough to grow up in a home with a stay at home mom. She was called a 'homemaker'. She baked outstanding desserts but for special occasions we were indulged with the purchased bakery item. As I recall, these cakes served eight quite nicely with a slender slice of semi-frozen cake topped with peel-able frosting.

So, imagine my surprise when I opened the box to find an eight by eight pastry. I studied the box, which clearly stated 'serves eight'. I cut the cake into fourths. The fourths into eighths. I was met with laughter and what I believe to be muttered obscenities. (Okay, the obscenities were coming from me.)

I tried to pass the tiny slices off as VERY LARGE PETIT FOURS.

In the end, my family of four ate three fourths of a cake. We are not large people. We just like dessert served in a reasonable size.

Here is where I would insert a picture of the last piece of cake. However, because I sat the still warm plate of BBQ on top of the box, the peel-able frosting was stuck to the top of the box and I feel the mangled remains would not be representative of the spirit of Pepperidge Farms. So instead, I am inserting a picture of my Mom, with one of her amazing homemade desserts. Both serves a family of five. 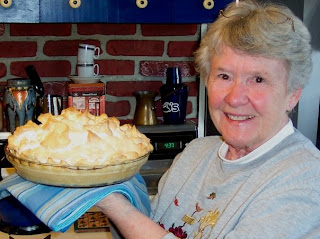 Posted by LauraEhlers at 8:42 PM