I am addicted to the 'On This Day' feature on Facebook.
I crack myself up reading my mostly ridiculous posts.
I get teary eyed at some of the photos and events that prompted certain comments.
I wonder just what was going on in my cerebral cortex when I come across some of those cryptic updates.
Apparently April 29, 2009 was not a good day. There was a huge thank you from a previous co-worker, who I miss every single day, as well as a plea to stock up on coffee for the following work day – posted at 1am. I worked 10am-1030pm back in those days.
In 2010 I was on my way to a Jimmy Buffett Concert – my second as a Parrotthead and the first tailgate we participated in.
In 2011 my Mom and I got up freakin' early to watch the Royal Wedding via our respective computers and Skype. It should be noted that we live about 2.5 miles away from each other. It should also be noted that Mom put on make-up, her fancy robe and we each had tiaras.
Light up tiaras.
The following years, up to today, included two blog posts - 2014  and 2013, food posts, work posts. But it was the 2012 post that caught my attention and brought me to this little trip down memory lane.

April 29, 2012 was a Sunday.  I complained about house cleaning, eating Snickers with Almonds, watching Lawrence of Arabia. My final thoughts for this day were posted as a Facebook Note. I  had not yet discovered blogging. The note was about a lovely evening Rob and I had on the deck. It was a very, everyday event but it just had that special something which makes the everyday extra-ordinary. This is for all of my nearly legendary contemporaries. Thanks for all the support, encouragement and insane inspiration.

Dinner on the Coast of Illinois

Of late, I have been suffering from what some 'Genius' in the 1970's labeled 'empty nest syndrome'. And, while closing up the first year of my official 'midlife', I am no where near the Sandwich Generation. Because not only are our children self sufficient, so are my parents.
Which brings me to my very non-creative Sunday. Weekends are my time to forget what I do for an actual living and pretend to be someone I am not...or only hope to be. I want to write; be a writer. Yet, the past few weekends have betrayed me. Abandon hope all who enter here, there are no original thoughts to be had. This Sunday was no different. Children and their plans for their future ricocheted through the phone lines and my text messages. A small storm of gigantic hail proportions made it quite clear that the clean up job I was hoping to skip would be addressed. Laundry and groceries only cemented my feet more firmly in the roll of wife-slash-mother.
Then suddenly in a flurry of veggie prep and fish marinate, I was sitting on the deck with my husband enjoying a crisp glass of Chilean white wine and the near sixty degrees at six thirty in the evening at the end of April perk of Global Warming. He was reading a book by a contemporary of Hemingway, I was reading a much more fluffy article in one of the many magazines I had dog eared in hopes of getting to. We pondered the lifestyle that could bring such interesting people together in such amazing places. I told myself the article – about the closing/remodeling of the Ritz in Paris – was research for a future novel. In actuality, it was a pipe dream. I will never get to stay in the Ritz, in Paris, in the 40's with Hemingway.
And then my husband did something extraordinary. He raised his glass in a toast to the day, to our dinner...to the Coast of Illinois. We clinked to the fact that the people who are the most important to us are healthy and happy. And it was clear to me that while I have never stayed in the Ritz in Paris, I have stayed in some pretty swanky hotels. I have eaten and prepared some five star meals and my contemporaries – writers, photographers, musicians, artisans, athletes - are just as legendary as those of that bygone era. They just don't know it yet.

And so it goes...on this day in April, on the Coast of Illinois. 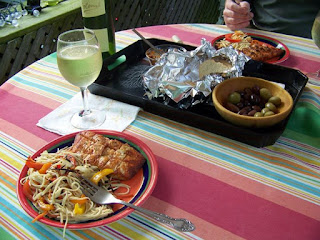 May every day be an extraordinary ordinary day.
Only one more day in the A to Z challenge!! So close...

Posted by LauraEhlers at 9:01 AM